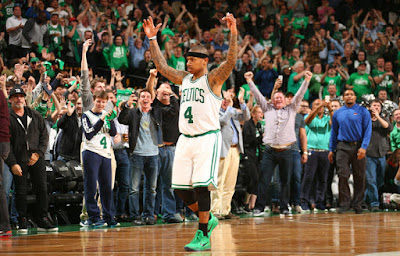 It was an instant classic.

A duel between Isaiah Thomas and John Wall. And when the dust settled, Thomas and the Celtics reigned victorious.

Thomas posted a historic, career-high 53-point performance to lead the Celtics to a 129-119 overtime win in Game 2, giving them a 2-0 lead in their best-of-7 series.

But before Thomas scored 29 of Boston's final 45 points, the game's momentum was in the hands of Wall and the Wizards. Through three quarters, Wall had already scored 35 of his 40 points to go with his 11 assists and the Wizards had a five-point lead (89-84) before Thomas went berserk.

With under six minutes to go in regulation, Thomas and Wall exchanged buckets that gave the Celtics a three-point advantage (104-101) before the Wizards went on a 9-0 run near the two-minute mark. Out of a timeout, Thomas drained a 3 to cut Boston's deficit in half and later found an open Terry Rozier for a game-tying 3-pointer (110) with 1:38 left in the fourth quarter.

The Celtics eventually fell behind again before the overtime period but Thomas' clutch pair of free-throws knotted the score at 114 before Wall and Bradley Beal each missed an opportunity to win the game. Beal grabbed an offensive rebound off of Wall's missed jumper and missed from 15 feet.

The C's would go on to outscore the Wizards, 15-5 in the extra period. Thomas scored nine of them.

His 53 points ranks second in Celtics franchise history for most points scored in the playoffs. Only John Havlicek (54) has scored more points in a playoff game as a member of the Celtics and the Celtics really needed it from Thomas down the stretch.

With a heavy heart, Thomas put together one of the greatest playoff performances on what would have been the 23rd birthday of his late sister, Chyna Thomas, who died on April 15 in a one-car accident.


"There was no way I couldn't play on her birthday," Thomas said after the game. "I wanted to win for her. I wanted to play well for her. So luckily we got the win."

Behind efficient scoring, the Wizards got out to a quick start -- scoring 42 first-quarter points. Led by Wall's 19, Washington eventually grabbed a 14-point lead in the third quarter -- their biggest lead of the night.

But it was Thomas' heroics, along with defensive stops by Bradley and Crowder, and a big shot by Rozier in the fourth quarter that propelled the C's to their second consecutive win of the series. The Celtics have now won six straight since falling behind 2-0 in their opening round series against the Bulls.

With a 2-0 lead, the Celtics will head to Washington D.C. for Game 3 on Thursday where they will look to grab a commanding 3-0 lead.

Isaiah Thomas became the first Celtics player to score 30-plus points in consecutive playoff games since Paul Pierce did from May 5-7, 2003. Thomas is only the fourth player in Celtics franchise history to record 50 or more points in a playoff game (John Havlicek (54), Sam Jones (51), Ray Allen (51)).