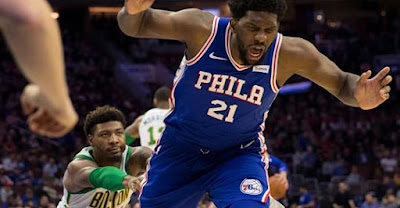 On Thursday the NBA fined Marcus Smart $50,000 for shoving Joel Embiid during the Celtics' 118-115 loss to the 76ers Wednesday night.

The league's vice president of basketball operations Kiki VanDeWeghe noted in a statement that Smart's repeated acts of unsportsmanlike conduct this season, played a factor into the penalty that was handed down. The Celtics guard has already been fined for two prior incidents so far in 2018-19.

Smart was ejected less than a minute into the third quarter of the Sixers' win over Boston. He was not happy with a non-call following Embiid sticking out his left elbow on a screen that Smart ran through on defense and fell to the floor.

While Embiid had his back turned, Smart quickly got up and shoved the 76ers' center with both hands that sent Embiid crashing towards the baseline. Embiid went after Smart before both players were restrained and no punches were thrown.

Smart was assessed a flagrant-2 foul and was ejected after the officials reviewed the play.


"It's hard, because you send a message to a guy that you can't protect yourself," Smart said Friday in explaining his actions. "You're supposed to just take that. I'm sorry, I just wasn't raised that way. I protect myself at all times."

Celtics coach Brad Stevens, initially expressed how "disappointed" he was in Smart following the loss, where Boston blew a 69-58 halftime lead in the aftermath of the ejection.


"Don't get it wrong, we love all that Marcus [Smart] is," Stevens explained. "And part of Marcus is his fire. As you know, a time or two a year, it gets the best of him but this is just a reminder of how important he is. He knows how we all feel and he knows we all love him. That's just part of it, it's part of a long season."

Smart has previously been fined $35,000 for going after De'Andre' Bembry of the Hawks back in January and $25,000 for shoving JR Smith during an October preseason game in Cleveland.


"You know I’m probably held on a different scale than anybody else," Smart said after practice on Friday. "I seen a couple nights before Russell Westbrook do the exact same thing and he got hit with a flagrant one. I got ejected, so it’s definitely, just, different type of people, individuals, held to different type of platforms, and higher pedestals than others, which is understandable. And unfortunately I’m on that lower totem pole." [MassLive]

A fight almost breaks out after Marcus Smart pushes Embiid in the back during the game (@AAANe_MAnews) #AAANortheast pic.twitter.com/dHVVO5dKQB
— Celtics on NBC Sports Boston (@NBCSCeltics) March 21, 2019