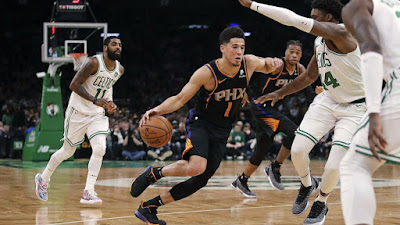 Brad Stevens once again has his work cut out for himself.

After spending the first 30 games of the regular season carving out roles for his key guys, Stevens now has to find a way to make up for the production lost in his frontcourt.

The loss of Aron Baynes, who suffered a broken hand in the opening minutes against the Suns Wednesday night, has dramatically changed things for the Celtics.

This is following the loss of Al Horford, who's dealing with tendinitis in his knee and has no timetable set for his return, which suddenly makes the loss of Baynes a devastating one. The Suns wasted no time in taking advantage.

Phoenix not only destroyed the Celtics on the glass when they out-rebounded Boston, 56-37 but they also got to the free-throw line -- where they netted 18-of-22. The Celtics on the other hand managed to only get to the line 14 times and giving up 44 points in the paint didn't do them any favors.

The end result was a 111-103 loss, Boston's second straight since its eight-game winning streak. Meanwhile, the lowly Suns (8-24) have rattled off four consecutive wins and their most recent victory at TD Garden is easily their most impressive.

Kyrie Irving added another double-double (29 points, 10 assists) to the season, Jayson Tatum chipped in 18 points, 8 rebounds while Marcus Smart and Terry Rozier each finished with 12.

Stevens will have to turn to guys like Daniel Theis and rookie Robert Williams to make up for Horford and Baynes up front before taking on a top Eastern Conference team like the Bucks Friday night. This is a unique opportunity for the first-round draft pick and the sophomore big man to prove themselves against an elite conference team but if you ask All-Star point guard Kyrie Irving if the responsibility falls solely on the big men, he'll tell you it's going to take much more than that.


Irving knows it's unfair to ask a young rookie to make up for what Horford and Baynes have provided for the Celtics throughout the season. Instead, Irving believes it's up to the rest of the team to make an effort in helping the youngster and that it's more important remember the team concept that's been vigorously implemented by Stevens all season long.


"He's 21-years-old," Irving reminded reporters. "We expect a lot out of Rob but also there's a learning curve for him. He does a lot of great things already so I think the sky's the limit for his potential and what he brings to our team. Obviously, getting more repetitions at this point. Creating for lob opportunities at the rim as well as getting blocks and protecting the paint but us as guards when we're missing guys we have to help Rob rebound as well.

"He's contesting (shots) and trying to go for every block and our weak-side and crashing, and helping him out it's just as important as him going for a rebound so that's part of being on a team -- we all have to cover each other."

Offensively, Irving says he's fortunate to have a player like Williams to play with. Between Williams and Theis -- two athletic bigs who can play above the rim and create defensive stops -- it makes things easier for Irving when he's attacking the rim -- he now has a new young big man to target as an alternative option.


"Having a consistent lob threat at the rim where you can throw it around the rim and he can go get it -- you can see how easy it is for me and Rob," Irving explained. "You know, going in and people stepping up at me, he's always a threat at the rim for offensive rebounding and lobs. So, I love playing with Rob."

Williams told reporters that he's not only ready to take on the challenge of an increased role, he's confident that he can succeed. According to him, it's his job to step in and take advantage of the opportunity presented to him and that it's the "next man up" mentality that he believes in when it comes to injuries surrounding the Celtics.

The schedule doesn't get any easier, while some home cooking will be nice for a team going through a rough patch at the moment, they're going to have to figure things out quickly before taking on the Hornets -- a team that topped them in Charlotte back in November -- and the Sixers on Christmas Day.

Celtics: Kyrie Irving (4) and Marcus Smart (4) combined for 8 of Boston's 13 steals. For the fifth time this season, Irving registered 20-plus points and 10-plus assists, making him the first Celtics player since Larry Bird (1990-91) to do so through the first 30 games of a regular season