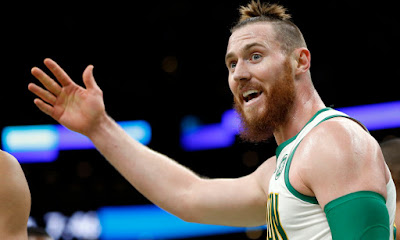 Aron Baynes broke a bone in his left hand just two minutes into the Celtics loss to the Suns on Wednesday night at the TD Garden.

Coach Brad Stevens was already short-handed up front without Al Horford (knee tendinitis), Marcus Morris (knee soreness), and Guerschon Yabusele (ankle) in the rotation before Baynes injured his hand trying to fight for a rebound.


Boston Celtics center Aron Baynes has suffered a broken left hand and will undergo surgery, per league sources on @TheAthleticNBA @WatchStadium. Baynes is expected to return in a month.
— Shams Charania (@ShamsCharania) December 20, 2018


Celtics president of basketball operations Danny Ainge confirmed that Baynes fractured his fourth metacarpal and could miss up to a month, while making his weekly appearance on Boston's 98.5 The Sports Hub.


"He’s getting surgery this morning," Ainge said. "He’s going to get a pin put in his finger. He’ll probably be out three or four weeks."

With Baynes being the latest big man sidelined, it means rookie Robert Williams III will get some minutes with the starters and Daniel Theis' playing time will also increase.

Despite the Celtics recent bout with injuries, Ainge remains optimistic about his team moving forward.


"We’re playing so many people and have guys missing games every night, it’s really hard to see what we could be," Ainge added. "I don’t think we are there yet, but I am really excited about our team. We just have to get healthy. … The injury bug has hit us, but we’ll get everybody back, and we’ll continue to move forward."

The Celtics are in the middle of a four-game home-stand, as they'll host the Milwaukee Bucks Friday night, before the Charlotte Hornets come to town Sunday, followed by the Philadelphia 76ers on Christmas Day.