Report: Marcus Smart could return to game action by the start of second round 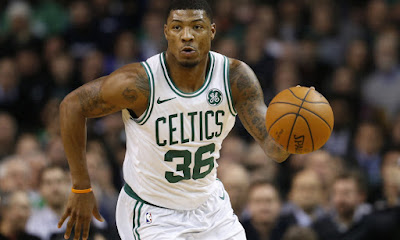 According to Shams Charania of Yahoo Sports, Marcus Smart's injured right thumb has been re-evaluated on Monday and the Celtics guard could return to game action by April 27.


Smart had surgery back on March 16 to repair a torn ligament in his thumb and the Celtics announced that he would return to basketball activities in 6-8 weeks. The re-evaluations revealed that Smart is ahead of schedule.

The second-round of the NBA Playoffs is set to begin on April 28, so the Celtics could have their best perimeter defender back before the first round ends. Smart injured his thumb while diving for a loose ball in a loss to the Pacers on March 11.

With Kyrie Irving to miss the postseason following his second knee procedure, that only leaves Terry Rozier and Shane Larkin as the only other traditional ball handlers for the Celtics to begin their playoff run.

Boston has two games remaining, as they face the Wizards on the road Tuesday and wrap up their regular season with the Nets at the Garden on Wednesday.