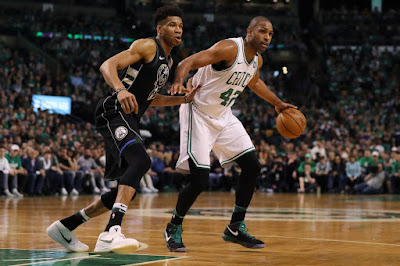 Al Horford made his presence felt in the Celtics' 113-107 overtime win over the Bucks Sunday, proving just how important his play will be in Boston's best-of-7 playoff series.

Horford, who finished with a team-high 24 points, including 13-of-14 free-throw attempts to go with his 12 rebounds, three blocks and a pair of steals, was an integral piece for the Celtics in taking a 1-0 lead against the Bucks. He led his team on both ends of the floor -- he scored inside the key and from the perimeter, helped facilitate the offense, was the centerpiece on the defensive end and deterred Giannis Antetokounmpo on a handful of plays.

When asked about Horford's impact, Brad Stevens clearly wasn't phased by Al's performance. It's expected from the 32-year-old veteran at this point of the season, and if the Celtics are to survive their first-round series against Milwaukee, Boston's success will be predicated on Horford's impact.

Stevens commended Horford for his efforts on both ends of the floor; specifically focusing on his matchup against the best player in the series -- Bucks forward Antetokounmpo.


"We wanted [him] to go -- we wanted to post him. We wanted to make him play in the post and make Giannis defend down there, and I thought Al did a good job," Stevens said from the podium. "He earned all 14 free-throw attempts. I know that because he was really, really, working to get to the line and really working to get position early. You know, I thought Al battled. I thought everybody of both sides looked a little gassed at the end of overtime. I'm not sure anybody was more tired than Al because he put in an incredible effort for us."

Horford's offense was certainly a talking point when the Greek Freak took the podium after the game.


"I gotta do a better job guarding Horford," Antetokounmpo said. "Really big body, he knows he's under control, he knows what he's doing down there. Hopefully in Game 2, I won't play on my heels, I'll play more on my toes and be able to defend without fouling, too."

Horford's trips to the charity stripe was certainly a momentum-killer for the Bucks. It seemed to rear its ugly head almost every time the Milwaukee was on the verge of reclaiming the significant lead they built in the second quarter.

But the Bucks never held an advantage larger than 10 points, while guys like Antetokounmpo (6), Eric Bledsoe (6), and Khris Middleton (5) continued to rack up fouls against the Celtics. Horford nearly netted all 14 of his free-throw attempts, and said after the game that while his game plan was to attack the rim, he didn't anticipate to make so many trips to the charity stripe.


"I was trying to score [in the paint] and they were fouling," Horford explained. "Just reaching and whatever but I'm trying to be aggressive, I'm trying to go score the ball and I was able to draw fouls."

Coach Stevens told reporters after the game that the Celtics will be riding on Al throughout the playoffs, and when that message was relayed to Horford back in the Celtics locker room, Horford smiled and says he ready to take on the challenge of his young team throughout the postseason.


"It's go time," Horford responded. "This is the time when you wanna play, you wanna be in this kind of game, setting the tone and it all starts on the defensive end and I try to set the tone on defense and kind of go from there. I guess, doing whatever I can do to help us win. That's what it's all about."