Jaylen Brown on Game 7 against the Bucks: 'We got nothing to lose' 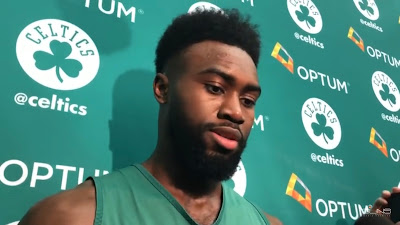 Jaylen Brown was more than happy to address the media before practice on Friday, when asked about Game 7 against the Milwaukee Bucks.

The 21-year-old has already gotten a taste of a Game 7 atmosphere at the TD Garden, when the Celtics eliminated the Washington Wizards in the Eastern Conference semifinals nearly a year ago.

Brown believes tonight's game is a great opportunity for Boston's younger players to prove themselves when the lights shine the brightest.


"We got nothing to lose. Everybody has been writing us off anyway," Brown said before morning shootaround. "We got our backs on the wall, it's at home, we're going to come out and bust through that wall, if that's what it takes.

"We got a lot of young guys looking to make a name. And it's the perfect time and a perfect stage. I think everybody is excited about it. So I can't wait to get out there."

Brad Stevens and his players expect nothing less than intense environment when it comes to their home crowd on Saturday.


"All six games in this series have been crazy. To Milwaukee's credit, their crowd was tremendous, but there's no place like TD Garden," Stevens said.

Added Brown: "I expect it [the Garden atmosphere] to be what it's always been ... legendary, all those words. A great atmosphere. The perfect basketball environment."

The Celtics, despite injuries, will look to advance to the second of the playoffs for the second consecutive season, where the Philadelphia 76ers will be waiting.

Brown has led these young Celtics in scoring throughout the postseason and knows he has a much more important role this time around that last year in the playoffs.


"That's even more exciting," Brown said. "Last year, my role was not as big as it is now. A lot of weight is on my shoulders, and I know that. So I want to come out and just be the best I can be for my team.

"Pressure -- I don't even consider it pressure at this point. You gotta do what you gotta do. I'm just coming out with a clear head, playing it like it's Game 1, with the intensity that needs to be had, and come out with a W."


Check out what else Brown had to say from Friday morning's pre shootaround presser below: