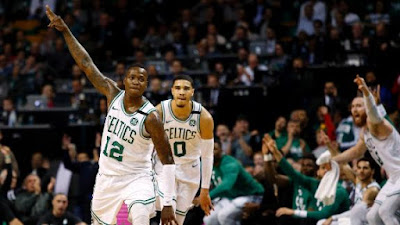 With another member of their starting lineup sidelined for Game 1, the Celtics delivered an emphatic statement to the Sixers Monday night at TD Garden.

Without starting shooting guard Jaylen Brown, the trio of Al Horford, Terry Rozier and Jayson Tatum were the lead ship in the opening matchup of their best-of-7 series as they routed Philly by the tune of 117-101.

Horford, Rozier and Tatum combined for a whopping 83 points. Rozay led the group with 29 points, Tatum reached a career-high 28 points while Horford poured in 26 points on 10-of-12 attempts and grabbed 7 boards.

The Celtics used a 13-4 run in the first quarter that propelled them to an early eight-point lead. Rozier was cooking, he scored five straight points the midst of the run on his way to 10 first-quarter points then came Horford's offense -- which carried over from the first half into the second.

He scored 19 of his 26 points in the second and third quarter behind a well-balanced attack. Horford took defenders into the post, stretched them out to the perimeter and kept the Celtics' offensive rhythm in stride while other followed suit.

Boston as a team picked up its momentum after the break but so did Embiid. His 11 third-quarter points kept the Sixers afloat and when Redick's 3-pointer with 5.1 seconds left trimmed the Celtics' lead down to 13 before entering the final frame.

He finished with a double-double (31 points, 13 rebounds), Redick netted 20 points and Ben Simmons chipped in 18 points, 7 rebounds and 6 assists.

The free-throw differential also helped Philly stick around in the second half. Through three quarters, the Sixers netted 17-of-21 from the charity stripe, while the Celtics attempted only 10.

But when the Celtics picked up their offense from behind the arc, their lead grew in a hurry midway through the fourth quarter. Taking advantage of Philly's lackadaisical perimeter defense, Boston connected on 17 treys, including seven from Rozier.

He drained three in the final frame -- where he scored 13 of his 29 points.


"Sometimes you just have to read what the defense is giving you," Rozier explained after Game 1. "Sometimes you get into the hole, trying to be aggressive creating for myself or others, sometimes you knock down a couple of shots and the rim looks super big. I was just trying to stay aggressive whether it was shooting outside the perimeter of getting to the basket and being aggressive. That's for all of us. We got a lot of great shooters, four man's that can stretch the floor. You got to pay attention to the defense, read the defense, what they give us."

In the midst of Horford and Rozier's offensive attack came Tatum's who attacked the rim, converted buckets in transition and got to the free-throw line -- where he drained 11-of-12.


"I thought he was really good, really consistent," Brad Stevens said of Tatum's performance. "Made some tough shots but also got to the rim and made some plays for us. Got to the line, which we needed, with his drive. So, I thought he had a good game."

The message was well-received by the Sixers -- a team that will head into Game 2 knowing just how explosive the Celtics offense still is without Kyrie Irving, Gordon Hayward and Jaylen Brown. As one of the toughest defensive teams in the league, Philly isn't accustomed to allowing 117 points so adjustments will be made.

On the other end, Stevens admitted his team defended better in the final games of its previous series against the Bucks than what he saw in Game 1 -- something he'll look to adjust before Thursday night.


"I didn't think it was as good as any of the last three Milwaukee games," Stevens stated. "But there were parts about it that were good but we have to clean up quite a bit. They exposed us in a lot of areas. And credit them for that; they run great stuff and it's hard to guard all those guys and all those actions."

Aside from Tatum's frequent trips to the line, the Celtics as a team didn't shoot nearly as many free-throws as their opponent. Philadelphia went 26-of-35 Monday, while the Celtics drained 18-of-19.