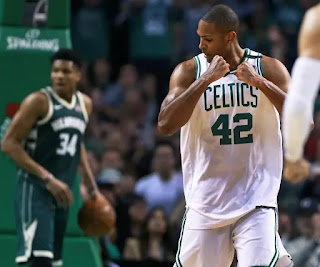 When Brad Stevens made an adjustment to his starting lineup prior to Game 5 against the Bucks, it changed the complexion of the best-of-7 series.

The Celtics head coach decided to go with a smaller lineup and inserted rookie Semi Ojeleye. As Stevens' defensive specialist, Ojeleye's sole purpose was to slow down the best player in the series -- Giannis Antetokounmpo.

Game 5 turned out to be Antetokounmpo's worst game of the series. He finished with 16 points and only attempted 10 shots. Ojeleye immediately made his presence felt throughout the final three games of the series, including Saturday's Game 7 win -- where The Greek Freak was limited to 15 points in the first three quarters.


"Semi is probably the guy that we need to be talking about," Al Horford told reporters after the Celtics' 112-96 win. "He did an unbelievable job on Giannis. It's just a lot of credit to him. He stayed ready. He didn't always play a lot all year. When we needed him most, he stepped up. We don't win this series without him."

With Jaylen Brown doubtful for Game 1 against the Sixers, Ojeleye will undoubtedly play a role against Philly, which poses an entirely different challenge in the form of Ben Smmons, a point guard in a power forward's body. The 6-foot-7 Ojeleye will get a turn in defending him after proving he could keep up with the likes of Antetokounmpo.

Stevens' decision to go with Ojeleye was a crucial turning point. Bucks coach Joe Prunty compensated for the loss of John Henson (back) by going big, plugging in guys like Tyler Zeller and Thon Maker.

Maker was a catalyst in Games 3 and 4 -- where the Bucks evened up the series -- before Stevens' adjustment gave the Celtics an advantage in defensive switches. Ojeleye's flexibility to guard the perimeter and bigs down low strengthened the starting unit, and there wasn't a better Celtics player who could stay in front of Giannis.


"The team effort on him [Antetokounmpo] was outstanding, led by Semi -- I thought he was unbelievable in these three games defensively against Giannis," Stevens said after Saturday's win. "Everybody was just a little bit better against him and made him earn everything."

When Horford was asked about Ojeleye's defensive impact and how it made his life easier against the Bucks, the Celtics veteran said there isn't a player on his team who works harder then Ojeleye.


"Semi, to me, changed the series," Horford said. "The job he did was unbelievable. Giannis is such a great player and his ability to take the challenge and be able to hold his own gave me extra energy on the offensive end and I really needed it -- a lot of credit goes to him.

"I'm just proud of him. All year he's been working really hard. He's probably the hardest worker on our team. He just stayed with it. He definitely got rewarded."

The Celtics will certainly need that hard work from Ojeleye in their second-round matchup against  Ben Simmons and the Sixers. The best-of-7 series kicks off Monday at TD Garden.