Hawks 112 - Celtics 106: Hawks rally from behind against Boston's second unit 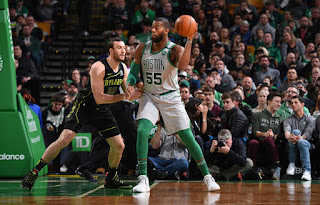 After the Celtics' second unit squandered a 13-point fourth-quarter lead, Brad Stevens decided to let it ride and kept his bench lineup intact for the final six minutes of a game that was tied at 99.

Abdel Nader, Shane Larkin, Semi Ojeleye, Jabari Bird and Greg Monroe took on Atlanta's starters and kept things close before the C's ultimately came up short in a 112-106 loss. Boston struggled to string together defensive stops, allowing Dewayne Dedmon to follow up a wide open 3-pointer with an easy dunk that gave the Hawks a two-point lead.

Taurean Prince's outside touch was the biggest reason Atlanta was able to come back. He finished with a game-high 33 points and led six Hawks in double figures.

After Larkin misfired on a potential go-ahead 3-pointer, Hawks guard Isaiah Taylor got to the rim with little to no resistance for an easy layup with 25.6 seconds left to play. The C's failed to convert offensively and when they managed to come up with a stop on the opposite end, Larkin missed an open layup with 9.7 ticks left that would have made it a one-possession game.

But Sunday's final score at TD Garden wasn't as important to Brad Stevens as it would have been one week ago. With the Celtics locked into the two seed of the Eastern Conference and only two games left to play, Stevens is looking to give his second unit as much experience as they can get this late in the season to gear them up for a first-round playoff matchup slated to begin in less than a week.

Without Kyrie Irving, Stevens knows he's going to need consistent production from his bench players and was asked if giving guys like Monroe, Larkin and Ojeleye late fourth-quarter minutes was based on the upcoming playoff series.


"That was it -- getting the appropriate amount of minutes but also, I was going to let those young guys play in the fourth," Stevens explained. "They did a really good job at the start of the fourth then they let their guard down a little bit defensively. They let Atlanta get back in the game and Atlanta made huge shots. I thought that Prince, obviously, was great tonight but they put a little heat on us with their shot-making."

Still, the Celtics bench combined for 47 points while Jayson Tatum was masterful -- he recorded 19 points on 8-of-12 attempts throughout the first three quarters. Al Horford finished with 16 points, 7 rebounds and Monroe's 17 points led the bench.


"I think the biggest thing when you start talking about going into the playoffs with less people on our roster and down some guys is how the bench play is going to be huge for us," Stevens said. "Whether it's two deep, three deep, four deep , whatever it is -- it's gonna be big for us."

The Celtics will head to the nation's capital Tuesday for what could be a preview of a potential first-round matchup against the Wizards.