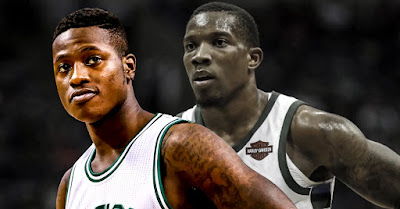 He's led the Celtics to a 2-0 series lead against the Bucks, is averaging 23 points a night and has quickly become one of the most known up-and-comers in the league.

Rozier has been so effective against the Bucks in this best-of-7 series thus far, that his primary defender in Eric Bledsoe refused to acknowledge the third-year guard after dropping a 120-106 Game 2 loss to the Celtics.

When a reporter pointed out to Bledsoe that Rozier hasn't committed a single turnover in the series and asked the Bucks guard if he was willing to take responsibility for Rozier ball-handling efficiency, Bledsoe gave a compelling response.

"I don't know who the (expletive) that is," replied back Bledsoe.


"I'm concentrated on the Milwaukee Bucks-Boston Celtics matchup," Rozier explained. "If he don't know who I am, it's all good. I don't even think it's funny. He might be talking out of spite or something."

Considering Bledsoe's recent struggles in trying to stay in front of Rozier throughout the first two games of the series, it's safe to assume Bledsoe is very familiar with Rozier's game. The Celtics guard torched the Bucks for 23 points in both games of the series, while shooting 48 percent from the floor, and put Bledsoe on skates before he drained a fade-away 3-pointer with 0.5 left on the clock in Game 1.

Meanwhile, Bledsoe is struggling to find his offense for the Bucks. His 10.5 points per game in Games 1 and 2 don't compute with the 17.8 points he provided a nightly basis throughout the regular season and the timing of it couldn't be any worse.

For a team that shot nearly 60 percent from the floor (59.7) against the Celtics Tuesday night, the Bucks certainly missed Bledsoe's scoring, especially down the stretch. After Milwaukee's 12-2 run cut its 20-point deficit in half with 4:13 left to play, the Bucks' offense dried up before the Celtics regrouped and put the finishing touches on their second postseason win.

All struggles aside, Bledsoe's attempt to play head games with Rozier is a veteran move. He baited Rozier for a response while trying to occupy real estate in the young guard's head as the series shifts to Milwaukee Friday for Game 3, but Rozier didn't bite.

In doing so, Bledsoe may have just delivered extra motivation to Rozier, while applying some pressure on himself to bounce back from two lackluster performances.

Either way, if the Bucks are to avoid a 3-0 hole Friday night, they're going to need help from guys not named Giannis Antetekounmpo and Khris Middleton, and that help starts with Bledsoe.