Marcus Smart waiting on 'being cleared for live play' this week 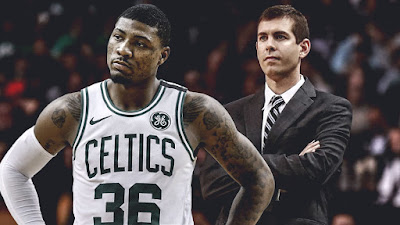 It's no secret that Marcus Smart has been putting up shots in practice and in pregame warmups throughout the first round of the NBA Playoffs.

What most probably don't know about Smart's rehab process is that he's also scrimmaging players in groups such as two-on-two, three-on-three and traditional five-on-five games.

According to Celtics coach Brad Stevens, Smart has progressed and it looks like he'll return to the lineup at some point this week if his surgically repaired right thumb has healed enough to sustain hits, even with a splint helping to stabilize it.


“He feels pretty good,” Stevens said. “He’s shooting the ball, doing everything in a workout that you can do. It’s just a matter of being cleared for live play.”

The fourth year Celtics guard averaged 10.2 points, 4.8 assists and 3.5 rebounds in 30 minutes per game this season. Smart suffered a torn ligament back on March 11, followed by surgery to repair his thumb on March 16.

At the time of his surgery, it was reported that Smart would be out of action six to eight weeks and so far all indications show that the 6-foot-4 guard will return on April 27, the earliest date possible.

Smart could play in Game 7 against the Bucks, if the series goes that far, or in Game 1 of round two if the Celtics, who currently have a 2-1 lead, make it past Milwaukee.

Smart spoke last week on wanting to get back on the court with his teammates and grant his mother's request of seeing him play again this season, after she was recently diagnosed with cancer.

Marcus Smart spoke to the media prior the Celtics and Bucks' Game 4 tip-off and says he will have his right thumb reevaluated in New York on Tuesday. If he's cleared for contact, Smart is now targeting a Game 6 return against Milwaukee.


"Right now, [a Game 6 return is] the plan and we're still on the same track," Smart said before Game 4 on Sunday. "I've been doing everything but contact, so I will be able to go and start that."

Smart believes his thumb is ready to sustain live in-game contact and will return sooner than what was reported less than 24 hours ago.


"The surgery did its job," said Smart, who injured himself March 11 while diving for a loose ball in a game against the Indiana Pacers. "Thumb is holding up well. I feel ready, I feel strong enough to get back out there. I'm just waiting on the OK."

Smart has been seen wearing a splint when putting up shots before each playoff game and in practice. He also does his typical strength and conditioning work, and the split has not bothered him at all.


"Actually [the splint and tape is] real comfortable. It feels like nothing's there," Smart said. "To have that comfortability, especially in my dominant hand, my shooting hand, that's a good feeling to have."