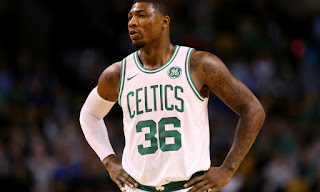 After visiting a hand specialist in New York, Marcus Smart will reportedly undergo surgery Friday afternoon to repair a torn ligament in his right thumb. However, the Celtics are not ruling out the possibility of seeing him return to the floor before the end of the season.

According to ESPN's Adrian Wojnarowski, Smart could rejoin the Celtics in the postseason. It all depends on how far the C's go -- a playoff run that could go as deep as the Eastern Conference Finals, would have Boston playing games in mid-late May.


Smart re-aggravated his right thumb Sunday night against the Pacers when he dove for a loose ball and hit banged his hand against the floor. This is the same hand he injured in January when he admitted to punching a picture frame moments after missing the potential game-winning shot against the Lakers.

If the Celtics are able to push their playoff run into the Eastern Conference Finals, it would give Smart almost two full months to recover from thumb surgery. Or, we could see Smart back before then in the conference semis, however, all signs point to Smart definitely missing the opening round series.

In the meantime, expect guys like Terry Rozier and Shane Larkin to pick up the slack in the back court while Smart rehabs and works on making his comeback.