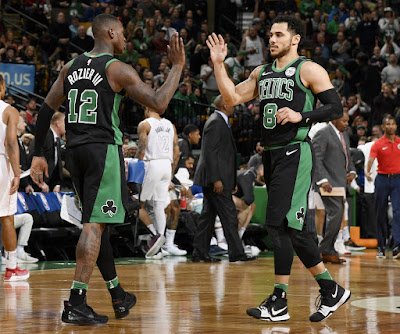 The Celtics have officially ruled out Terry Rozier (ankle) and Shane Larkin (illness) for tonight's road matchup against the Milwaukee Bucks.

According to the team's twitter feed, both Rozier and Larkin will join Kyrie Irving (knee) and Marcus Smart (thumb) on the disabled list, leaving Brad Stevens to get creative at the point guard position.


#NEBHInjuryReport for tonight’s game vs. @Bucks:


Rozier injured his left ankle in Saturday night's win against the Raptors and sat out of practice on Monday, despite saying he would play and the Celtics listing him as 'questionable' followed by Stevens saying early Tuesday that Rozier was 'probable.'

Larkin, who was released from the hospital after a fews days and a bout with the flu, has missed one game and could re-join the team in Toronto on Wednesday.

Rozier has scored in double figures in 25 straight games (since his first NBA start in Febuary), while shooting over 43-percent from behind the arc.

The Celtics will face a potential first-round matchup against the Bucks on Tuesday night, beginning at 8 eastern.