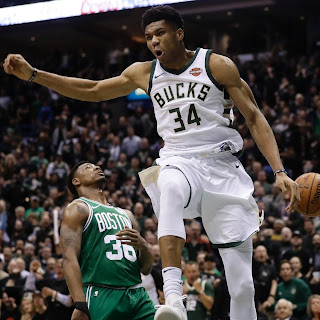 With their backs against the wall, the Bucks -- like they've done all series -- took advantage of home court, and bested the Celtics, 97-86, forcing a Game 7 in Boston.

The Bucks did a wonderful job of minimizing Boston's chances to score on the fast break by aggressively attacking the Celtics defensively and utilized the best player on the floor -- Giannis Antetokounmpo.

He charged the rim with no fear and scored at will. Antetokounmpo did everything for the Bucks Thursday, he carved the Celtics' defense up on his way to 31 points on 13-of-23 shots to go with his 14 rebounds.

Whenever the Celtics mounted a comeback effort, Giannis was there to put a gag in it by grabbing key rebounds for second chance points or he converted put-back attempts. After a missed layup from Malcolm Brogdon, Antetokounmpo was there to push Milwaukee lead, 89-81.

Outside of guarding Antetokounmpo, Boston limited opportunities for Khris Middleton (16 points, 7-of-8). Brogdon's 16 points on 5-of-7 attempts gave the Bucks a boost while Terry Rozier again struggled on the road for the Celtics. He finished with 16 points but it took 17 attempts for him to get there.

Although Rozier did a stellar job defending Eric Bledsoe (9 points, 3-of-10), the Celtics couldn't overcome the fourth-quarter deficit. Boston pulled to within two points before the Bucks went on a 12-3 run that ended with Antetokounmpo at the free-throw line with two minutes left to play.

Jayson Tatum, who led the Celtics with 22 points, carried the scoring load in the second half where he dropped 10 third-quarter points, including 6-of-6 from the free-throw line. He effectively attacked the rim as Boston trimmed its lead before the fourth quarter and Jaylen Brown finished with 14 points.

However, Antetokounmpo's impact carried over as his play kept the Bucks' playoff lives alive as the series now turns back to Boston for the decisive seventh and final game of the series.

The Bucks shot 50.7 percent from the floor, while the Celtics struggled offensively and finished the game with a 37 percent clip. Milwaukee also out-rebounded the Celtics, 48-39.