Marcus Smart's mother diagnosed with cancer, talks about his return 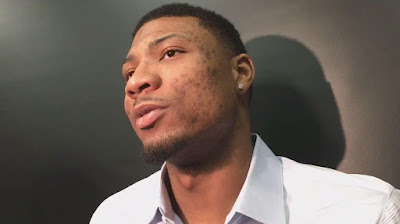 Celtics guard Marcus Smart revealed that his mother, 63-years-old, has been diagnosed with bone marrow cancer. Despite her illness, she has implored her son to rejoin the team during the playoffs in hopes that Smart will return to the court this season.


Marcus Smart recently found out his mother has cancer. He visited her briefly last week. She wants him with the Celtics. Told him it would bring a smile to her face to see him back on the court.
— Jay King (@ByJayKing) April 17, 2018


Smart visited his mother, Camellia, last week in Dallas and it was during that trip back home when he was told the news of her diagnosis. Smart is currently rehabbing from surgery on his right thumb and could be targeting a potential Game 7 return in the Celtics' first round series against the Bucks. The game is scheduled for April 28, if necessary.

Smart's older brother, Todd, died at the age of 33 after a long bout with cancer in 2004, when Smart was just 9 years old.

While Smart says his mother is surrounded by family, which made it easier make the return to Boston and be with his teammates, he believes that a bone marrow transplant is not a possibility at this time for his mother, but did say "she's a fighter," and "We're trying to see what can work right now."


"She told me she'd rather I was here than back there, doing what I love to do, because she loves to watch me play, because that would put a smile on her face, if I got back healthy and back on the court," Smart said before prior to the Celtics Game 2 tip-off against Bucks at TD Garden.

It hasn't been easy for Smart, who is trying to balance being around the team, as they have a 1-0 lead over Milwaukee in their best-of-7 series and waiting to find out what more he can do for his mother.


"You want to be here. I love playing basketball," Smart said. "A lot of my friends and family were telling me that basketball is my eye of the storm, where I'm the most calm, where I can think and release all that pressure. But it is hard to leave her, knowing the situation. But my family members are all there, and she has everyone around her."

Smart plans to make another trip back home to visit his mother again, following a checkup she had on Tuesday.

In the meantime if you haven't already check out Smart's YounGameChanger Foundation, which strives to help young people with cancer in local hospitals, where you'll often see Smart make visits to meet with patients.