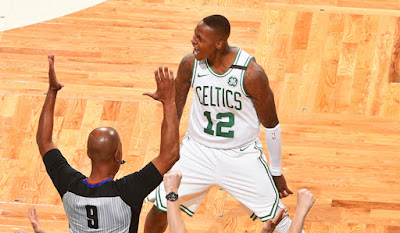 Stevens told reporters before the series-deciding game that his players knew what it was going to take to grab a win and then they went out and grabbed it by the proverbial neck.

Boston cruised to a 112-96 win -- in a game where they controlled the lead throughout the night -- while dominating the Bucks on both ends of the floor and never let up in the second half. The Celtics' tempo made all the difference.

With Jayson Tatum leading the way, the Celtics got off to a quick start and set the tone early. Boston used a 7-0 run to guide them to a 30-17 lead at the end of the opening frame and coerced the Bucks to five turnovers in the early go.

Boston took a 50-42 lead at the break before pouring it on in the third quarter. Horford added 10 points before the fourth quarter and Tatum picked up where he left off from the first as the two led the Celtics to a 31-point frame.

The C's took that momentum into the fourth quarter -- where they opened up a 15-point lead with 6:16 left -- and that's when the fans at TD Garden could smell their team closing in on a series clincher. Out of a timeout, former Patriots quarterback Drew Bledsoe appeared on the jumbo-tron to pump up the crowd and it not only got the fans going but Rozier as well.

He drained back-to-back treys to extend the Celtics lead to 19 points. Fitting for the player who mistakenly called Bucks guard Eric Bledsoe after the former Patriot.

Rozier and Horford each scored team-highs (26 points) Tatum added 20 and Smart chipped in 10 from off the bench. Khris Middleton finished with a game-high 32 points, Eric Bledsoe added 23 points and Giannis Antetokounmpo netted 22.

The Greak Freak had a slow start as the Celtics did a terrific job of making it tough for him to find his offense. He hit 7-of-16 to go with his 9 rebounds and five assists.

Celtics will host the 76ers at TD Garden Monday for Game 1 of the Eastern Conference Semifinals.