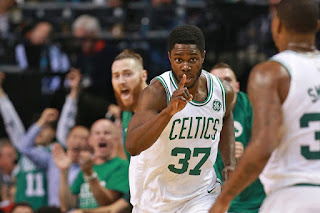 Milwaukee's dynamic duo averaged a combined 53.2 points throughout the first four games of its best-of-7 series against Celtics. Although Stevens knew Marcus Smart's return would undoubtedly provide a defensive spark off the bench, he wanted to strengthen his starting unit.

Instead of starting big man Aron Baynes, Stevens turned to rookie forward Semi Ojeleye -- a move that successfully limited Antetokounmpo's attempts and led to Middleton's worst shooting performance of the series. The Greek Freak finished with a modest 16 points on 10 attempts while Middleton, who entered Tuesday night's game shooting at a 61.5 percent clip, netted 9-of-21.


"Giannis is a heck of a player. You're not going to be perfect against him," Brad Stevens told reporters after Game 5. "You're not going to hold him down by any means. He makes plays for other people, he's very unselfish if he's not the one scoring. But we just felt like we needed a little bit more ball pressure overall, and so that was the decision to go smaller. Semi is a guy who has been a versatile defender for us all year, and that's a tall task to ask a guy to guard Giannis the whole night."

Ojeleye, who found out 25 minutes prior to tip-off that he was starting in Tuesday's 92-87 win, said he used his physicality to turn Giannis into more of a facilitator rather than the 27-point scorer he's been since the start of the playoffs.


"I tried to stay in front of him, be physical," Ojeleye said. "He hits tough shots, you just hope you're there on the close out.

"We played them from the season through the playoffs so there's a lot of film that's added up. He has multiple moves -- it's just his size and speed is tough. You can try to anticipate his shot but you have to [sometimes] just fall back and not anticipate so much."

Between Ojeleye, Al Horford and Marcus Morris, Stevens threw a number of different guys at Antetokounmpo but it was Ojeleye who did most of the work on Giannis throughout his 41 minutes on the floor. Behind his strength and footwork, Ojeleye was able to take away Antetokounmpo's isolation moves -- which limited his drives to the rim -- while the Celtics' double-team forced him to settle for jump shots.


"It allowed us to switch a lot, a lot of the same bodies out there to contain their guys," Terry Rozier said when asked about Ojeleye's start. "Their offensive firepower in Giannis and things like that. That is just part of the playoffs, you have to adjust and make adjustments and that is what we did and I think it worked out for us."

This isn't the first time Stevens has made successful adjustments to his lineup. When he needed scoring in last year's series against the Bulls, he added Gerald Green -- who turned in an 18-point performance -- to his starting-5 and it helped even up the series. Two years ago, Jonas Jerebko's name was called for defensive purposes and the move also translated into two wins to even up Boston's best-of-7 series against the Hawks.

This time around, Stevens hopes the decision of adding Ojeleye to the starting lineup will once again render a pair of wins. Boston is now one Game 6 win away from knocking out the Bucks and advancing to the Eastern Conference semifinals.