Terry Rozier (ankle) listed as 'questionable' against the Bucks 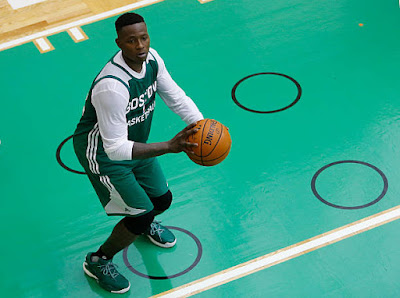 Terry Rozier has been listed as 'questionable' for the Celtics' matchup against the Bucks after an ankle injury suffered in Saturday night's win over the Toronto Raptors.

Rozier, who did not participate practice with the team, says he iced his left ankle and will definitely play Tuesday in Milwaukee.


Terry Rozier tweaked his ankle late in 4th quarter of win over Raptors on Saturday.


Rozier sustained the injury when he landed awkwardly on a fast break layup and was fouled on the play by the Raptors' DeMar DeRozan late in the fourth quarter.

The Celtics have already ruled out Shane Larkin (flu) for tomorrow night, after being hospitalized for several days, the guard did not travel with the team.


Shane Larkin spent a couple days in the hospital due to the flu. He will not travel with Boston at start of road trip but could join in Milwaukee if doctors clear him.


Larkin joins Kyrie Irving and Marcus Smart as 'injured guards' for Brad Stevens, leaving Kadeem Allen as the only other 'traditional point guard' on the roster available to play outside of Rozier.

Stevens could also use Jayson Tatum as another point guard again, which seemed to work well on Saturday against the Raptors.

The Celtics will tip-off against the Bucks on the road Tuesday, followed by the Raptors on Wednesday night north of the border.