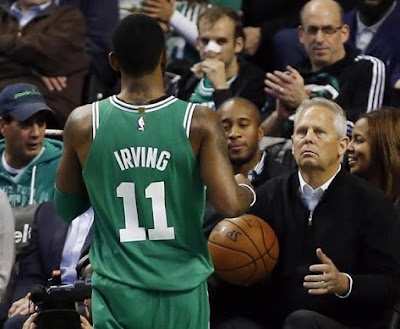 Just when you thought things couldn't get any worse for the 2017-18 Celtics, you would be wrong.

When news broke early Thursday afternoon around the basketball world that Kyrie Irving would miss the playoffs following a second procedure on his left knee and while a devastating blow for Boston sports fans, it's not warranting any worries for the president of basketball operations Danny Ainge.

Call it optimism or the power of positive thinking but despite the injuries that should have put the Celtics in the lower half of the playoff picture in the East the moment Gordon Hayward broke his ankle five minutes in to the 2017-18 campaign, Ainge has really liked how his team has developed since opening night in October.


"It was so fun in training camp to watch Kyrie and Gordon (Hayward) and Al (Horford) play together," Ainge said. "Our young guys were blossoming, and it was just amazing how quickly things were working.

"Then, as the season went on without Gordon, we got to see how well guys responded, and turned a terrible thing into a positive. Even after Kyrie went down, our guys had the mindset of 'OK, we're going to make a really good run here.' But now we've lost Daniel (Theis), Marcus (Smart)and Kyrie. [ESPN]

Ainge is convinced this young Celtics core, that just came off a six game win streak without Irving, Smart or Theis, will persevere in the playoffs just like they have all season.


"It's part of what we go through," said Ainge. "It's not fun for anybody, but our guys won't quit right now, I'll tell you that." [ESPN]

The Celtics, who become the 'comeback kings,' will have to rally big time without their All-Stars if they want to make a deep postseason run.

In an odd season where the Celtics won 16 straight games after losing their first two, at times had a better record on the road than at home and had a winning percentage against the Western Conferance (something Brad Stevens has always struggled with), Ainge has reminded those who follow his team not to dwell on the 'what ifs.'

A lesson we should all learn despite going through a difficult year.