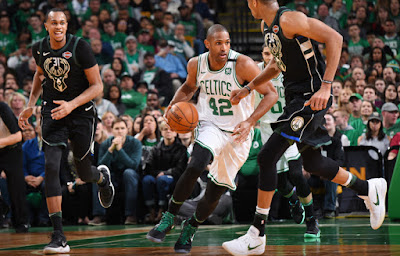 The Celtics kicked off their best-of-7 series against the Bucks in thrilling fashion.

For an undermanned team, Boston started and ended the game in the best kind of way: with efficiency, grit and vigor. The C's captured a 113-107 overtime win to take Game 1 and a 1-0 series lead against the Bucks.

Khris Middleton found Malcolm Brogdon for an open trey to tie the game at 96 before Terry Rozier created space against Eric Bledsoe and nailed a step-back 3-pointer and gave his team the lead with 0.5 left in regulation. But the game, of course, didn't end there. Middleton took a 30-footer off an inbound pass from Giannis Antetokounmpo that found the bottom of the net and set the game into OT.

In the extra period, Rozier drained another from deep -- which pulled the Celtics ahead by one (104-103) before Al Horford attacked the basket and drew a foul on Giannis that resulted in two points from the free-throw line for the C's. Jayson Tatum followed suit and converted on a two-footer but the Bucks hung around.

Clinging onto a three-point Celtics advantage, Rozier grabbed Antetokounmpo's missed free-throw before Giannis attempted to tie Rozier up for a jump ball but was whistled for a loose-ball foul in the process. Antetokounmpo picked up his sixth and final foul while Rozier's made free-throw made it a two-possession game with 13 seconds left.

The Antetokounmpo-Middleton duo combined for 67 points for the Bucks. Antetokounmpo recorded a double-double (35 points, 13 rebounds) and Middleton connected on 12-of-20 for 31 points.

For a young undermanned team, the Celtics set the tone early -- which certainly made a difference in the first half. Boston attacked the Bucks by taking it to the rim instead of settling for perimeter shots and successfully built a 12-point advantage before the start of the second quarter.

However, the lead was short-lived. Milwaukee kicked back with a vengeance -- a whopping  26-4 run. But the Celtics quickly responded with an 11-4 run to end the first half and pulled to within three, 47-44.

Al Horford stepped up big defensively on Antetokounmpo and also frustrated the young superstar on the offensive end of the floor by drawing fouls in the paint and converting easy buckets. Horford also finished with a double-double (24 points, 12 rebounds) -- he was detrimental for the Celtics.


"We're going to ride Al," Brad Stevens explained to reporters at the podium after the game. "He's been unbelievable in being a facilitator for us all year. He has his moments because of the way that we're being defended, where he gets to be more of a featured scorer. With where we are now, he's going to be more of a featured scorer, and facilitate, and guard Giannis, and do everything -- he'll probably run our film session tomorrow. So, that's his job."

Boston will look to take a 2-0 series lead Tuesday at TD Garden.