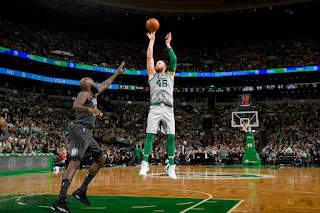 As the locked in No. 2 seed in the Eastern Conference, Brad Stevens rested his core guys in the Celtics' season finale at TD Garden Wednesday night.

With one eye on the game and the other on the playoff bracket deciding matchups around the league, Celtics fans eagerly awaited to find out which team Boston was going to host this weekend.

Meanwhile, Aron Baynes put together a career night; his 26 points and 14 rebounds led the C's to a 110-97 win over the Nets. Most impressive, Baynes did it in just over 20 minutes and became the first NBA player to do so in over 50 years -- when Len Chapell of the Pistons recorded 30 points, 15 rebounds back in 1967.

Led by Baynes, the Celtics controlled the tempo early on and pulled ahead by 10 at the half (53-43). Boston eventually stretched its lead to 23 -- the largest of the night -- before the fourth quarter when Shane Larkin connected on an easy two.

Larkin, who got the start at point guard, finished with a dozen points along with 10 boards, Guerschon Yabusele added 16 points and Jonathan Gibson poured in 18 points from off the bench.

The Celtics attacked Brooklyn early and often -- they finished with 64 points in the paint. Guys like Al Horford, Jayson Tatum, Jaylen Brown, Terry Rozier and Marcus Morris looked on as they took the night off in preparation for Game 1 of this weekend's playoff series.

The Wizards, a team that had a chance to leapfrog the Bucks for seventh place, loss to the Magic Wednesday night while the Bucks dropped their season finale against the 76ers. The two losses coupled with the Heat knocking off the Raptors in overtime, set the stage for a first-round series between the Celtics and the Bucks.

Game 1 will tip off at TD Garden on Sunday afternoon.

Baynes became the first Celtics player since Kevin Garnett to reach at least 25 points and 14 rebounds in 20 minutes or under.