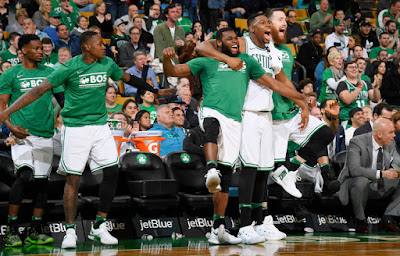 The Celtics entered Friday night's game with a roster filled with players fresh off stints in the G-League, two-way deals and 10-day contracts.

Still, the C's handily defeated the Bulls, 111-104 at TD Garden. The offense didn't struggle much against the lottery-bound Bulls, Boston didn't miss Jayson Tatum or Al Horford -- both earned the night off -- while the Celtics have secured the second seed in the east and will are three games away from finishing what's been an unpredictable season.

Jaylen Brown and Greg Monroe were given the keys to lead Brad Stevens' offense and thrived. Brown scored a career-high 32 points, including 7-of-10 from deep, and Monroe recorded his first triple-double of the season (19 points, 11 rebounds, 10 assists).

Hustle was a common theme for every Celtics player Friday night as they eclipsed last season's win total (53) with a well-balanced attack. Even through the bleakest moments, there wasn't an ounce of quit in these lesser-known heroes.

Late in the fourth quarter when the Bulls mounted a charge, Chicago managed to cut its deficit to four before Brown had the ball stripped -- which led to a field goal that trimmed the lead to four (102-98). But the Celtics retaliated; Jabari Bird made a defensive stop at the rim -- taking away a layup from Sean Kilpatrick before the C's went on an 8-2 run in the final three minutes.

Kilpatrick dropped a team-high 24 points off the bench and Bulls rookie Lauri Markkanen finished with 20 points on 7-of-11 shots.

The young Celtics hope to ride the momentum of Friday's game into a matinee matchup against the Hawks.

Four Celtics scored in double figures while Boston shot a whopping 55.6 percent from the field, including 41.2 percent from behind the arc.