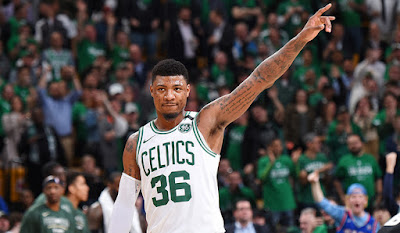 From the moment Marcus Smart made his way to the scorers' table shortly after the first timeout in the opening frame, the crowd at TD Garden erupted and it immediately made an impact. He kicked things off with a steal, and seconds afterwards he hit the deck for a loose ball.

Smart even deflected a lob pass for Antetokounmpo -- which immediately drew a reaction from the crowd. It was heads-up plays like those that propelled the Celtics to a 92-87 Game 5 win over the Bucks in their best-of-7 series.

The heart of the Celtics defense returned to the floor for his first game since March 11 and not only helped Boston limit the Bucks to 87 points -- the lowest point total of the series -- but created defensive stops and second-chance opportunities.


"He obviously brought a great deal to the table for us tonight, as he always does. And you know, he made some plays," Brad Stevens said after the game. "That play in the first quarter where he dove, you know, we had three missed threes tonight that I thought, 'I don't know if I've ever seen such beautiful plays before it and the ball not go in.' Seems like the ball always goes in when you dive on the floor like that and make that pass. We had a couple of extra passes that didn't go in but we found good shots at times and defensively we were much better."

The play Stevens was talking about described Smart in a nutshell. It was another game-winning play to add to his catalog.

Smart created an easy dunk for Horford and gave the Celtics a seven-point advantage with 28 seconds left in the game.


"It means a lot for our team. I think I said it early in the year that [Marcus] was kind of like the soul of our team," Horford explained. "Everything that he brings; his toughness, unselfishness, hard-nose player and we fed off his energy tonight. I felt the crowd fed off of it, we fed off of it and it's just good to have him back. This has been a genuinely nice surprise for our group because I didn't think he was coming back, I didn't want to get my hopes up even when I heard it was a possibility. We're just happy to have him back and he had a huge impact on the game tonight."

In an effort to limit Giannis Antetokounmpo, Stevens inserted defensive specialist Semi Ojeleye into the starting lineup for Aron Baynes and it certainly had an effect on the All-Star forward. The Greek Greak finished with his lowest point-total of the series -- 16 points on 9-of-21 attempts -- while Khris Middleton finished with his fifth consecutive 20-plus scoring night (23).

At the podium, Smart was asked if at any point during the game did he think twice re-injuring his thumb when he dove to the floor, and Smart's response didn't surprise anyone in the media room.


"Never," Smart replied. "I was always thought coming back from injuries -- the last thing you want to do is have a mental game going on with yourself and psyching yourself out and just start thinking about the injury. I just wanted to make sure I came out. Things area going to happen. It's the game of basketball, it's part of the game. If it's supposed to happen, it's supposed to happen, so just keep playing."

The Celtics will certainly need Smart's high-level of energy in Game 6. With a 3-2 lead, the Celtics have a chance to close out the series Thursday night in Milwaukee and advance to the Eastern Conference semifinals.

Milwaukee's shot at a 36.8 percent clip Tuesday night. When they managed to trim its 16 point lead down to four, the Celtics retaliated with 3-pointers from Smart and Horford, along with key bucks from Marcus Morris and Terry Rozier down the stretch.