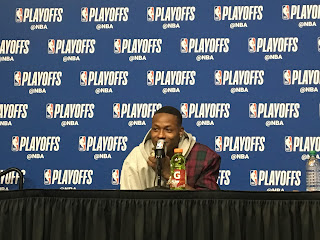 The two hung out at Irving's home -- where they relaxed, laughed and enjoyed each other's company, much like they have all season long. Rozier left with Irving's sneakers, since the veteran won't need them while he recovers from knee surgery.

It was a fitting metaphor, because those are some big shoes to fill. But Rozier is determined to prove he's up to the task.

In Sunday's 113-107 victory of the Bucks in Game 1 of their first-round series, Rozier not only nailed the go-ahead 3-pointer with half a second left in regulation, he scored 23 points, dished out four assists, and committed zero turnovers in 46 minutes. He played with Irving's advice ringing in his ears.


"His message was, 'go out there and take what's yours, go out there and dominate, go kill and don't worry about what nobody is saying,'" Rozier told reporters after Sunday's 113-107 win over the Bucks.

From improving the accuracy of his pull-up 3-pointers and crossover fade-aways, to the way Rozier has sharpened his ability to slash through defenders and finish strong, Rozier's offensive approach reeks of Irving. And when it came down to talking basketball, Irving's advice to Rozier before Game 1 was fairly simple.

Rozier undoubtedly knocked in some Irving-ish clutch shots down the stretch in Game 1. After breaking a 96-96 tie with a step back trey with 0.5 left on the game clock, Rozier lit up the Bucks by scoring eight of the Celtics' 14 points in the overtime period.

He finished with 23 points, included a team-high four 3-pointers to go with his four rebounds.

Since Irving's season-ending injury, Rozier has been one of the most vocal players in the Celtics locker room who has embraced his newfound role as a focal point of Brad Stevens' offense. Throughout Irving's absence, Rozier averaged 18.2 points in March and as for the postseason, he's already off to one heck of a start.


"It's been amazing. This is my third time in the league, third time in the playoffs and it just keeps getting better," Rozier said. "It's unfortunate what happened to our teammates throughout the year, but we still got each other and we still got to fight, still got to win. I just love playing with these guys and they just give me all the confidence in the world, but this year is probably the best one. Plus, I'm starting -- so it's like a dream."