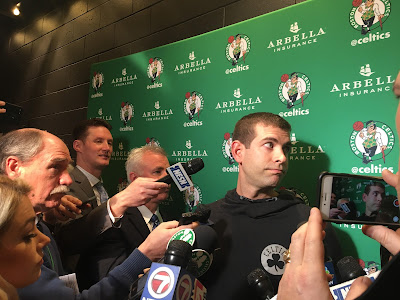 The news of Kyrie Irving's season coming to an end was a devastating blow for the Celtics -- a team that was destined for a deep playoff run.

Brad Stevens, who addressed the media for the first time since the news broke Thursday, expressed Irving's frustration before facing the Bulls at TD Garden.


"He's really disappointed, obviously," Stevens said. "After the initial surgery, the thought was he would be back in three to six weeks. We thought it would be closer to three than six. The way that he was intentionally progressing, everything else, you know it's just one of those things [that's] out of his control. He's bummed, as you can imagine."

Stevens assured reporters that Irving's left knee is structurally fine and that a bacterial infection that was discovered when Irving had a tension wire removed from his knee is the sole reason Irving will have another procedure done. After visiting numerous doctors for second and third opinions, the decision was unanimous for Irving to have season-ending surgery.

Irving will have two screws removed from his left kneecap Saturday.

Do you wish Irving had this surgery done sooner rather than this late in the season?


"There was no reason to think that it was going to be an issue," Stevens replied. "He had played with it for two and a half years and it really was a heads up [decision]  -- just the removal of the tension wire -- it's the bacterial infection that's the issue. But as far as structurally sound and the effectiveness of hat as far as , you know, the health of his knee three years ago and the [minimally invasive] surgery was pretty good. I guess it's just one of those things. Again, I feel bad for these guys because it's totally, totally out of their control"

As for the players who are healthy and are one week away from an opening round playoff series, Stevens is confident in his group. He pointed to recent wins against teams like the Thunder, Trail Blazers and Raptors as proof of how high the Celtics' level of focus is right now and says he doesn't expect that to change.


"To me it's about the guys and how they feel," Stevens said. "We've all be through it enough and injuries are a part of the game and you just focus on coaching your team and we'll look back on the season and review the season when the season is over. But I don't play the what if game, what could be game. We're going to play tonight and find out how we do."