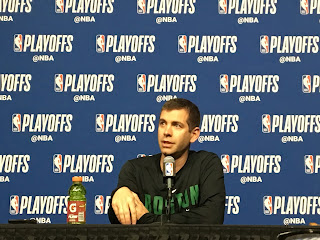 Jaylen Brown is doing everything in his power to play in Game 1 against the Sixers, but the probability of that happening is not looking good for the second-year guard.

Moments before tip-off, Stevens said the likelihood of Brown taking the floor wasn't promising, however, that hasn't stopped Brown from trying. Jaylen was limited to 16 minutes in Game 7 against the Bucks Saturday after suffering a hamstring strain that is expected to keep him sidelined.

The Celtics head coach didn't completely rule him out for the opening game of their best-of-7 series against Philadelphia -- stating that Brown was on the phone with doctors fighting for clearance to give it a go Monday night, while speaking to reporters from the podium.


"He's on the phone right now with our team doctor with our trainers and they're all talking about it, he really wants to play but I'd say it's very doubtful" Stevens revealed. "If he doesn't play, then we'll start Marcus Smart."

Stevens also added he's reverting back to his traditional front court of Al Horford, Jayson Tatum and Aron Baynes. Semi Ojeleye, who got the nod in Games 5 through 7 against the Bucks, will come off the bench.

The length and strength of Philly's frontcourt, led by rim protector Joel Embiid, forces Stevens to add size to his starting unit. When asked if his decision to start Baynes was matchup based, Stevens nodded his head up and down  -- confirming the obvious.

Especially if Brown is unable to play. The Celtics back court shrinks dramatically between Smart and Rozier -- which according to Stevens, will most likely be the case in Game 1.

The fact that Jaylen couldn't finish his workout tests was a discouraging sign for Stevens, who isn't expecting to see Brown in uniform.


"He went through stuff this morning, although they cut him short from going through the whole workout, he feels a lot better," Stevens said. "He's anxious to play, I think that's part of the discussion. But I think if there's any more tests or discussion on the possibility, he'll go out and do whatever he needs to do on the court for them [doctors] to feel comfortable."