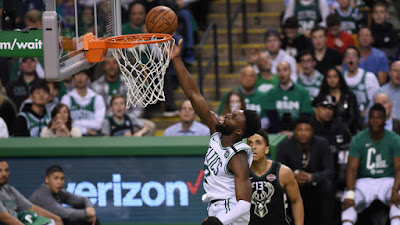 If you thought Game 2 between the Celtics and Bucks was destined to have the same nail-biting ending similar to their first showdown, you underestimated these young Celtics.

Behind Jaylen Brown's playoff career-high 30-point performance -- one of six Celtics players to finished in double figures --  the Celtics handed the Bucks a beating at TD Garden by the tune of a 120-106 victory. Boston now holds a commanding 2-0 lead in their best-of-7 series.

Brown was sensational as he netted 12-of-22, including five from deep and pulled down five boards. The second-year guard attacked Milwaukee with a well-balanced attack of perimeter jumpers while attacking the rim and finishing strong.

Terry Rozier picked up where he left off from Game 1 as he turned in 23 points, including a trio of treys from deep, along with eight dimes. Marcus Morris' 18 points led the second unit and Al Horford contributed 16 points.

Reminiscent of Game 1, the Bucks kicked off the second quarter with a rally that pulled them close and did it in a hurry. Milwaukee's 8-2 run led to a timeout called by Brad Stevens just over two minutes into the frame.

By halftime, the C's doubled down their offense from the opening frame and took a 60-51 lead. Boston tacked on 30 more points before the final frame and eventually led by 20, devastating Milwaukee's chances of pulling close towards the end of the game.

Six Bucks also scored in double figures but only two -- Giannis Antetokounmpo, Khris Middleton -- scored over a dozen. Antetokounmpo turned in another 30-plus point night (30) while flirting with a triple-double (9 rebounds, 8 assists), Middleton finished with 25 points.

The offensively gifted duo combined for 55 points on 23-of-31 shots. Eric Bledsoe and John Henson each finished with a dozen.

The series will shift to Milwaukee Friday night for Game 3.

The Bucks impressively managed to finish the night shooting at a 59.7 percent clip in a losing effort. Percentage-wise, Milwaukee's offense was slightly more efficient than the Celtics' (53.3), however, its defense allowed 120 points and couldn't stop the bleeding in the second half -- where Boston doubled their halftime advantage and took care of the basketball. The C's only committed five turnovers Tuesday.

Jaylen Brown, 21, became the youngest player in Celtics' history to score 30 points in a playoff game.