Marcus Morris has become a Fan Favorite in Boston 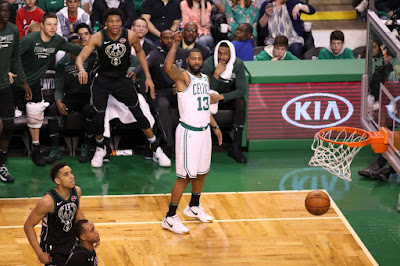 Marcus Morris is making quite a name for himself around these parts.

He's carved out a unique role for the Celtics and has turned into Brad Stevens' most reliable player off the bench. Morris turned in another exceptional performance Tuesday --  18 points, 5 rebounds, and tied Rozier for a game-high plus-19 game rating.

His offense complimented guys like Jaylen Brown (30 points) and Terry Rozier (23 points) in their 120-106 win over the Bucks. And while Morris continues to play at a high level, his popularity among the fan base has grown as well.

That's because Morris has become a constant thorn for the Bucks, they haven't figured out a way to slow him down. Morris' knack for finding the bottom of the net in moments when the defense lets up has made him a dependable asset for Stevens.

When the Bucks put together a fourth-quarter run to slice their deficit down to 10, it was Morris who drained a pair of contested field-goals to put the Bucks away for good.


"I just do what the team needs me to do," Morris said. "We needed a bucket, I got to my spot and made my shot."

He's made a habit of doing that. Specifically, towards the end of the regular season when he helped the Celtics secure the No. 2 seed.

Averaging 19 points while shooting 48.3 percent from the floor throughout the month of March, Morris has proven he's ready to rise to the occasion in the final frame of tight games. Highlighted by his game-winning 3-pointer that topped off a 100-99 win over the Thunder back on March 20 along with countless other outstanding performances throughout the month, his reputation grew immensely.

Morris' play is critical for the Celtics' playoff run and has resonated in each of the Celtics' first-round wins against the Bucks. Defensively, he's been the enforcer in the front court alongside Al Horford.

Morris' flexibility in defending guards from the perimeter and bigs down in the paint has created fits for Bucks head coach Joe Pruty, who is struggling to find consistent offense from guys not named Giannis Antetokounmpo and Khris Middleton.

"I think they liked me, but now they're starting to love me," Morris said about Celtics fans following a 110-99 win over the Raptors back on March 31 -- when Morris was ejected in between shooting free-throws in the final minute after jawing back and forth with Raptors players from the charity stripe. TD Garden's faithful erupted as Morris waved goodnight on his way to the tunnel.

There's already been plenty of trash talking between the Celtics and Bucks, with Morris orchestrating a fair share of it. When he got into it with Middleton in the second half of Tuesday night's win, Morris and Celtics fans figuratively embraced each other when the crowd cheered him on while Morris asked for more from the crowd and smiled.

However, Morris knows he won't be receiving the same treatment Friday night when the series shifts over to Milwaukee for Game 3. Still, he's excited to ride the momentum of Games 1 and 2.


"I expect it to be a hostile environment, especially for me," Morris said. "I'm ready for it. I wanna have the same attitude like I'm in Boston."