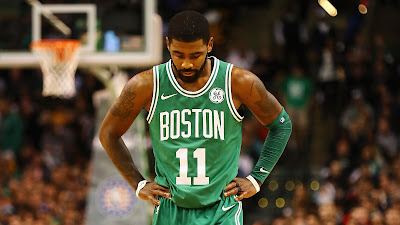 Kyrie Irving will miss the rest of the regular season and playoffs, following another procedure to remove two screws from his left patella that were inserted to repair a fracture he suffered during the 2015 NBA Finals.

According to ESPN's Adrian Wojnarowski, the Celtics are set to announce later today that Irving will undergo surgery on Saturday after a bacterial infection was discovered around the screws during the All-Star's most recent 'minimally invasive' procedure back on March 24, that removed a tension wire.


The wire had been placed in the knee during the same surgery back in 2015, along with the screws and Irving felt "immediate relief" once the tension wire was removed, according to ESPN's Jackie MacMullan, who said the team believed that was the source of pain for much of the season.

While the Celtics have said that Irving's patella has completely healed and is "structurally sound," Irving is expected to be out four to five months following Saturday's procedure.

The loss of Irving for the postseason comes at the worst possible time, as the Celtics, who hold the No. 2 seed at 53-25, were hoping of representing the Eastern Conferance in the NBA Finals.

Irving, who has not played since March 11, averaged 24.4 points, 5.1 assists and 3.8 rebounds in his first season in Boston that lasted only 60 games.

The Celtics, who have been hammered with injures all year, are also without Marcus Smart, who had surgery on his right thumb, is expected to return at some point in the playoffs.

After news broke of Irving's knee, the Celtics' odds at the Westgate Las Vegas SuperBook dropped from 20-1 down to 80-1 to win the NBA title and from 9-2 down to 20-1 to come out of the East.

Boston has four games remaining on their regular season schedule that include the Bulls and Hawks at home, followed by the Wizards (a potential first-round opponent) on the road and then the Nets in their home finale.