Marcus Smart (thumb) cleared to play Game 5 against the Bucks 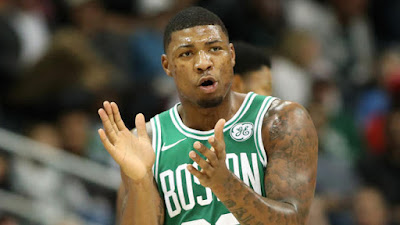 Marcus Smart got his thumb re-evaluated and he has been cleared to play in Game 5, according to Brad Stevens, who spoke with the media at Celtics practice Tuesday morning.

Stevens noted that Smart will go through the team's shootaround before tonight's game and if he doesn't experience pain, then he will play. If something comes up between now and tip-off that the team doesn't like, they will hold him out.


Marcus Smart has been cleared but Celtics will wait to see how he responds to contact this morning before deciding his status for Game 5. pic.twitter.com/6RRo79b433
— Chris Forsberg (@ESPNForsberg) April 24, 2018


The Celtics upgraded Smart's status to 'questionable' for Game 5 on Monday after missing 19 straight games with a torn ligament in his right thumb on his right shooting hand. Smart underwent surgery early last month and was expected to return by a possible Game 7 of the first round or Game 1 of the second round of the NBA playoffs, but Smart is clearly ahead of schedule.


"Marcus felt great over the weekend," Stevens told reporters. "[He] actually flew yesterday. Got reevaluated yesterday, still has to go through some things later this morning after our shootaround, and then we’ll see how he feels after that.

"If he feels good then he’s been cleared physically to go. If he has any pain or anything comes up, then we’ll hold him out."

Boston's best-of-7 series with the Bucks is tied 2-2 after losses in Games 3 and 4 out in Milwaukee this past weekend.

The Celtics could benefit from the return of Smart, as they have struggled to contain Khris Middleton throughout the four games, who is averaging 25.5 points and shooting 62-percent from behind the arc.


"This is just an opportunity for him to come in and do what he does best," Stevens said of a potential return. "And that is impact the game with his energy, his physicality, his savvy and his skill."

Game 5 will tip-off from the TD Garden tonight at 7 EST.