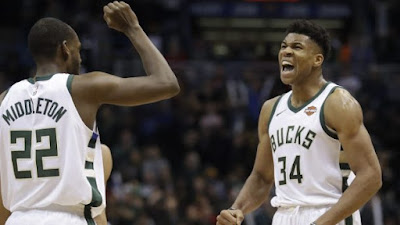 The Bucks proved why they're a dangerous, yet, flawed playoff team in their 106-102 victory over the Celtics Tuesday night.

Given the circumstances, it was a valiant effort from the Celtics, a night that started with Brad Stevens turning to rookie Kadeem Allen to start at the point guard position. Due to no Terry Rozier (ankle) or Shane Larkin (illness) available, while Kyrie Irving (knee) and Marcus Smart (hand) continue to rehab from their injuries, Allen had a decent showing but understandably, didn't give the Celtics what they needed to escape Milwaukee with a win.

To make up for Allen's shortcomings, Stevens went to Al Horford running the point guard position and then Jayson Tatum -- neither yielded positive results. Boston turned the ball over 17 times, which was a testament to Milwaukee's great length.

But the Bucks allowed the short-handed Celtics back in the game over and over again. The C's hung around throughout the night and in the end threatened to steal a win.

Khris Middleton started off hot, scoring 10 quick points while Giannis had a typical "Greek Freak" performance. After Middleton slowed down in the second half (2-of-6), Antetokounmpo took over and finished with a game-high 29 points to go with his 11 rebounds and six assists.

Middleton finished with 20 points, 9 assists, 8 rebounds and Eric Bledsoe chipped in 18 points off the bench.

Jaylen Brown led the C's with 24 points and Tatum added 20 as the two youngsters attempted to get their team out of a four-point hole. With 2:05 left, Al Horford's 3-pointer made it a two-possession game, however, the Celtics failed to make a crucial defensive stop when Antetokounmpo found Middleton in the paint for a loud finish.

Tatum earned a trip to the free-throw line on the following play but split the pair before Eric Bledsoe's field goal stretched Milwaukee's advantage to seven (103-96) with 36 seconds left, which ultimately secured a win for the Bucks. The loss cost the Celtics a chance at a winner-take-all matchup against the Raptors Wednesday night in Toronto. After losing to the Cavaliers, Toronto's lead on the Celtics for first place was in jeopardy but Milwaukee's win over Boston gave the Raptors a two-game lead for the top seed in the Eastern Conference.

Still, the Celtics will fly north of the border to take on the Raptors Wednesday night on the second night of a back-to-back.

Five Celtics players scored in double figures but with the Bucks shooting over 50 percent (54.4) while Boston tallied up 17 turnovers, the C's struggled to comeback from their 10-point deficit. Tatum, Brown, Greg Monroe, Horford and Aron Baynes combined for 30-of-56 from the field and carried a bulk of the offensive load as they combined for 80 points.