Why Al Horford will be most important against Giannis Antetokounmpo, Bucks 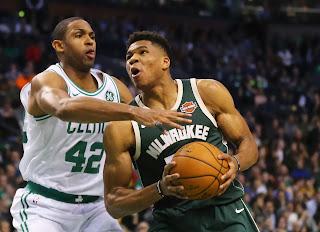 Fresh off the best season of his career, Giannis Antetokounmpo is entering his third postseason with expectations set higher than they've ever been.

He averaged 27 points and 10 rebounds a night during the regular season, while shooting 52 percent from the floor. He's hands down the best player in the Celtics' best-of-7 series against the Bucks -- that will kick off Sunday afternoon at TD Garden -- and will be the focal point of the Celtics' defense.


"We'll have to guard him [Antetokounmpo] with everybody on our team. I trust Al to guard any position because he can really move his feet; he has great size and length," Stevens said to reporters Friday afternoon. "His attention to detail is excellent, that said, it's not on one person to guard Giannis. It's not going to be one person's matchup the entire night. We have to throw a lot of different bodies at him."

Giannis is going to get his. He's an elite scorer who the Celtics will attempt to take away space and force him to become a jump shooter.

And while Horford's defense will be vital in slowing down the Greek Freak, his offense will be just as important for the C's. His versatility, an asset we've seen Stevens utilize in different ways throughout the postseason, allows Brad to turn to unconventional methods that have been successful in the past.

The last time these two teams faced off, the Celtics were so badly riddled with injuries (of course) that Stevens had to turn to rookie Kadeem Allen to start at point guard. Still, it was a close game to the end but when the Bucks started to pull away, Stevens tweaked his lineup by appointing Horford as the team's point guard.

But this wasn't the first time Stevens let Al facilitate the offense and don't think it will be the last, especially against the Bucks. In last year's playoff series against the Bulls, Horford was the floor general, swapping roles with Isaiah Thomas on the pick-and-roll -- which ultimately forced Robin Lopez out of the paint and created space for Thomas to attack the rim.

We should see a similar strategy against the Bucks. Milwaukee will do their best to force the Celtics to take shots from the perimeter and if the well runs dry and Boston finds itself in a scoring drought -- which is what we saw on April 3 in Milwaukee -- keeping Antetokounmpo out of the paint for guys like Jaylen Brown and Jayson Tatum will be key.

The Celtics don't necessarily need Horford to turn into a 20-point scorer (although it would help), 13-15 points a night should be enough to top the Bucks. Boston will thrive defensively in keeping the score down as long as they limit Milwaukee's fast-break opportunities.

However, Horford is one of the league's better passing big men, can put the ball on the floor, score from outside -- which forces his defender to run out and guard him -- and create open looks for his teammates.


"In general, Al's very important," Stevens explained. "[He's] important to the whole growth of our whole organization, to our every day, to what we try to accomplish in practice, in games. I don't think it's any less or more important -- he's just always been important, you know? He's good."

Stevens grinned and shrugged his shoulders shortly after explaining Horford's value to the Celtics. It was as if he figured it was obvious; Al's production is and has always meant a lot to this year's Celtics.

Only this time, the stakes are higher.