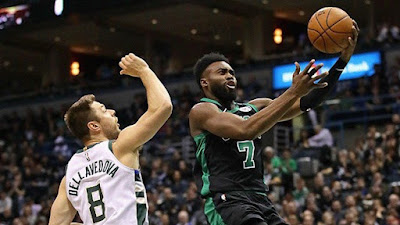 MILWAUKEE --  It was another career afternoon for Jaylen Brown, but his 34 points and a Celtics' 20-point rally were not enough to win in Game 4 and take a 3-1 lead back to Boston.

Instead, a late Giannis Antetokounmpo tip-in with mere seconds left in the fourth quarter, proved to be the difference maker for the Bucks, who won 104-102 to tie the series 2-2 on Sunday in Milwaukee.

The Bucks put the defensive clamps on Jayson Tatum, who couldn't find his offense throughout the first half and neither could Terry Rozier. Milwaukee's defensive wall pushed Rozier out from having any offensive rhythm and frustration with the officials along with physicality against the Bucks, took away Marcus Morris' focus.

Boston, for the second straight game finished with 35 points at halftime, while the Bucks (51) had a comfortable 16-point lead.

The Celtics managed to string together mini scoring runs in the third quarter by slowing the game down and taking full advantage of the 24-second shot clock -- something they didn't do in the first half.

Milwaukee extended its lead to 20, while Jayson Tatum scored 14 of his 21 points in the third quarter and the Celtics used a pair of 8-0 runs to cut the deficit to eight -- 75-67 -- to end the period.

It was short lived. After a missed layup by Antetokounmpo, who finished with a team high 27 points, 7 rebounds and 5 assists, led to a Jaylen Brown turnover on the other end that found it's way to Malcom Brogdon (10 points and 4 rebounds) for a corner 3-pointer -- that gave the Bucks a 102-100 lead.

After a pair of Al Horford (13 points, 9 rebounds, 4 assists and 2 blocks) made free-throws and the game tied 102-102 with 29.6 seconds left, the Bucks looked to Brogdon again for another go-ahead shot but missed the layup, as the Greek Freak swooped in and got the put back that ended up being the game winner for Milwaukee with 5.1 seconds left.

On Tatum's inbound bounce pass to Morris, the Celtics forward failed to hit the 14-foot jumper, giving the Bucks the victory and guaranteeing that they'll return to BMO Harris Bradley Center for a Game 6.

Boston will look to get back on track when they host the Bucks in Game 5 at the TD Garden on Tuesday night.

The Bucks controlled the paint defensively, out-rebounding the Celtics 34-27 and blocking 14 shots, but Boston grabbed 16 offensive boards to Milwaukee's two rebounds off the offensive glass.

Marcus Smart said prior to tip-off that he will have his surgically repaired right thumb reevaluated and if cleared, he will target a return to the Celtics lineup in Game 6 against the Bucks.