Terry Rozier makes Celtics history in loss against the Hawks 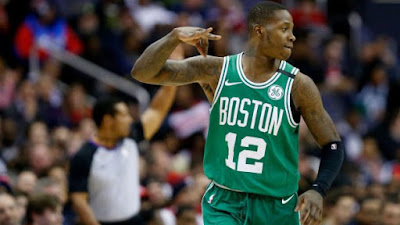 The backup point guard who has taken over Kyrie Irving's (left knee) starting duties at point guard, has made the most 3-pointers in one season by a Celtics reserve. Rozier topped Eddie House's 2009 record (151), Dana Barros (150) set in 1996 and assistant coach Walter McCarty (137) from the 2003-04 season.


With two games left in the regular season, Rozier will have an opportunity to add to his 153 treys on the season. Rozier is shooting 38.5 percent from behind the arc while averaging 11.3 points a night.

Coming off his best month of the season where he averaged 17 points and shot 41 percent from the floor and from deep, Rozier's outside touch has made him a valuable asset to the Celtics' success. The C's have won seven of their last 10 games.