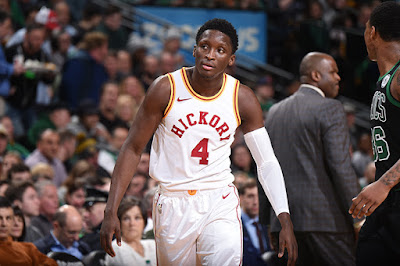 For the second straight game, the Celtics entered the fourth quarter without a member of their starting lineup, only this time it may have ultimately cost them the game and could be a legitimate concern moving forward.

Kyrie Irving experienced soreness in his left knee in the second half and sat out after halftime as the Celtics saw their 10-point lead disappear in the third quarter as the Pacers grabbed control of the game and topped the C's, 99-97 Sunday night at TD Garden. Boston had already started the game without two starters -- Jaylen Brown (concussion) and Al Horford (illness) -- which made matters worse when Irving was unavailable to finish the game.

Unlike their last five outings, the Celtics didn't get off to a hot start. For the first time in six games, they didn't score over 31 points in the first quarter, yet, they still pulled ahead by 10 at the half behind a well-balanced attack.

But not seeing Irving on the floor or on the bench at the start of the second half was the talk around the garden and that's when things got interesting on the floor. The Pacers went on a 16-4 run and eventually pulled ahead, 79-70 less than two minutes into the final frame.

The C's then responded with an 11-4 run that pulled them to within two. However, the Pacers held onto their lead and stretched it to seven.

Sandwiched between a Victor Oladipo three, Marcus Smart drained back-to-back treys that pulled the Celtics to within four with less than two minutes to play. But after Tatum split a pair of shots from the charity stripe, Oladipo attacked the basket for a contested lay-up that pushed Indian's lead to five (95-90).

He finished with a game-high 27 points. Myles Turner added a double-double (19 points, 10 rebounds).

But the Celtics weren't done yet. Out of a timeout, Terry Rozier drained a 3-pointer to make it a one-possession game and Tatum drew another shooting foul, only this time he sunk in both and knotted the game at 95.

Indiana wisely countered Stevens' small-ball lineup by turning to its big man in Turner out of a timeout who backed down Marcus Morris and finished at the rim. Rozier had a shot to tie it on the other end but his layup bounced off the rim and into the hands of Cory Joseph.

Oladipo swished in two more after he was intentionally fouled, making it a two-possession game with 10.4 seconds left. After Tatum converted an easy layup, Morris drew an offensive foul -- which gave the Celtics one final shot to tie the game and send it into OT.

With 1.4 left on the shot clock, Rozier took a fadeaway jumper that front rimmed the hoop as the clock expired. Smart finished with a team-high 20 points, 7 rebounds and 7 assists, and Tatum poured in 17.

Boston will look to bounce back Wednesday night when they take on the Wizards at home.

With four of their five starters shooting better than 42 percent from the floor, the Pacers as a whole nearly made half of their 39 attempts throughout the night. Indiana shot 48.1 percent, led by Oladipo who finished 10-of-20, including a pair of 3-pointers that led him to 27 points.