Marcus Morris is fed up with NBA officials; 'It's laughable at this point' 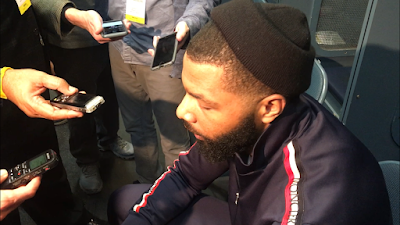 Celtics forward Marcus Morris is convinced NBA officials have it out for him.

Morris, who was handed a technical foul along with Bucks guard Khris Middleton after the two got into a brief dust-up before a jump-ball in the second quarter, was quickly subbed out by Brad Stevens. It was a smart move by the Celtics head coach as Morris was visibly upset and pleaded his case to the officials before exiting the game.

Still, Morris felt like the technical foul was uncalled for, and says it's an ongoing pattern that is frequently happening to him throughout the playoffs, and not others around the league.


"Game in and game out it's the same thing," Morris said. "I'm not doing a lot of chit-chat or being physical. I'm watching the other games and they're getting warnings. [For me] it's a straight technical foul.

"I just got fined, and I'm not worried about that it's just -- when you come to work every day and put your heart and soul into something and you just feel like it's a quick whistle. That's how it goes."

It's certainly been a chippy series, thus far. Physicality has been an underlining theme between the Bucks and the Celtics -- it's something Bucks head coach Joe Prunty and Stevens believe have given their teams a significant edge throughout the first four games of the best-of-7 series.

Morris, who continued to berate the refs in the Celtics locker room, was on the verge of picking up a secondary fine before a Celtics official attempted to end the scrum. But a reporter was able to squeeze in one final question -- one that Morris was more than happy to answer.

He was asked if it's tough for him to play at full strength when he's constantly feeling like he's moments away from picking up another foul.


"I play hard. I don't know no other way to play, it's not like I'm overly talking to the referees," Morris explained. "It's not like I'm making infractions with the referees. It's a game between men. We go out there and it's getting chippy. We talk a little bit but it's not over the top.

"I feel like every game I have to get a technical foul, you know what I mean? I'm not engaging into anything, I'm not going at the referees. I'm not talking crazy to him. For me, it's just getting old. Fining me, teching me, it's getting old. It's laughable at this point."