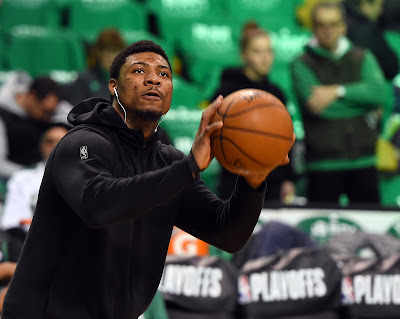 The Celtics have upgraded Marcus Smart (thumb) to questionable Tuesday's Game 5 against the Milwaukee Bucks at the TD Garden.

Smart spoke to the media on Sunday and said he would have his surgically repaired right thumb re-evaluated on Tuesday in New York, hoping he'd be cleared for contact and return to the court by Game 6.

By upgrading Smart to questionable, the Celtics are clearly leaving the open possibilities for Smart to play later on Tuesday, if all goes well and he's cleared.


Smart traveled with the team to Milwaukee for Games 3 and 4 of the series, as the Bucks have now tied 2-2. Smart also practiced, scrimmaged and put up shots in warm-ups outside of live action.

The fourth year Celtic guard believes his thumb is ready for contact and to re-join his teammates on the court.


"The surgery did its job," said Smart, who injured himself March 11 while diving for a loose ball in a game against the Indiana Pacers. "Thumb is holding up well. I feel ready, I feel strong enough to get back out there. I'm just waiting on the OK."

Having Smart back in the Celtics lineup would be a huge help for Brad Stevens, as he's running a little thin in the backcourt with Kyrie Irving (knee) out, and Shane Larkin playing scattered minutes behind Terry Rozier, who has started all four postseason games.

Danny Ainge noted that Smart would more than likely resume his reserved role of coming off the bench and play on a time restriction to slowly ease his way back into game shape.

The Celtics will look to take a 3-2 lead tomorrow night, with or without Smart, when they host the Bucks beginning at 7 p.m. EST.