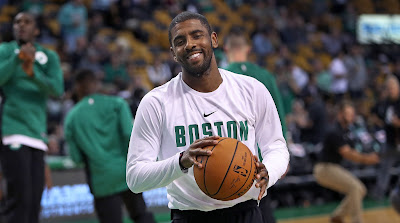 "The surgery went exactly as planned, and we expect Kyrie to be fully healthy for training camp in the fall," Celtics president of basketball operations Danny Ainge said in a statement.

The Celtics indicated a recovery time for Irving to be four to five months.

Brad Stevens on Friday, prior to the Celtics' win over the Bulls, said that having the tension wire removed in the 'minimally invasive' procedure last month, Irving felt immediate relief in the hopes he would return at some point during the playoffs.

But a pathology test revealed a bacterial infection in Irving's left knee. The decision was made to act quickly to have the screws removed and focus on the start of the 2018-19 season.

Irving's teammates were shocked to learn of a second surgery and the reality of a playoff run without their All-Star point guard leading the way.


"I was shocked. I mean, you still had the hope that he was going to be able to come back this season," Celtics All-Star Al Horford said Saturday. "But now we're at the point that we just have to look forward, look ahead and obviously, wish Ky a speedy recovery. And for our group, what we have now, we have to look forward. We can't dwell on the past." [ESPN]

How does Irving's absence affect the Celtics moving forward and in the postseason?


"Obviously, it makes it more difficult," Horford said. "Kyrie is the leader of this team, and we went with him and now we have to find ways to do it without him. We've been playing good basketball, and I believe that this group will -- we have a group that's hungry and that wants to keep getting better. And I think that when you have a group that wants to keep getting better, it's always a positive." [ESPN]

Boston has officially clinched the No. 2 seed in the Eastern Conferance and with three games remaining on the schedule they could face one of three opponents (Miami, Milwaukee or Washington) in the first round of the playoffs.

Celtics forward Marcus Morris is not pleased with the notion that teams are 'looking forward' to possibly facing an injury-riddled Boston as an easy first-round matchup.


"This team, we're resilient," he said. "Everybody on this team is ready to compete. We all feel disrespected. Kyrie, Marcus [Smart], [Daniel] Theis, all those [injured] guys are major for our team, but they're not here, so we still have to approach the game as if we're gonna win and get as far as we can." [ESPN]

The Celtics will host the Atlanta Hawks on Sunday, before heading on the road to take on the Wizards, followed by their regular season finale at the Garden against the Nets.