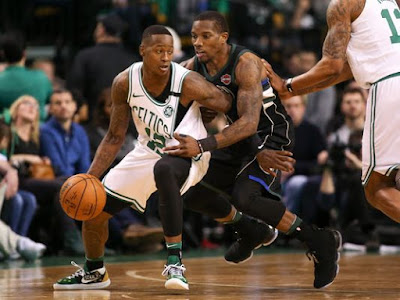 Nothing like some good old fashion trash talk to spice up an NBA playoff series.

Following the Celtics' 120-106 Game 2 victory at TD Garden Tuesday, Bucks guard Eric Bledsoe was asked if he took it personal that Terry Rozier hasn't committed a single turnover in the first two games of their best-of-7 series. The veteran guard had a compelling response.


Reporter: Terry Rozier hasn’t committed a turnover in 78 min. How personally do you take that matchup?

Considering Bledsoe's recent struggles in trying to stay in front of Rozier throughout the first two games of the series, it's hard to believe he doesn't know who Rozier is but here's a refresher for Bledsoe anyways. Rozier is the third-year guard who has torched the Bucks for 23 points in both games of the series, put you on skates and nailed a fade-away trey with 0.5 left on the clock in Game 1 and is shooting 48 percent from the floor.

It's been a chippy head-to-head matchup between the two guards in the early go and things will most likely ramp up in Game 3 when the series shifts over to Milwaukee. Ah, gotta love the NBA this time of the year, no?