Brad Stevens on Al Horford vs Bucks: 'I don't worry too much about Al' 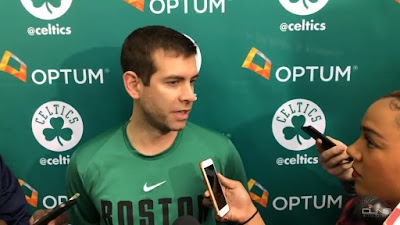 Celtics head coach Brad Stevens has a lot on his mind heading to Game 2 of Boston's best-of-7 series against the Bucks Tuesday at TD Garden.

While speaking to reporters at the Celtics practice facility in Waltham, Stevens preached about how Al Horford's offense in Game 1 against the Bucks made all the difference and while Al's contributions don't always show up in the box score, they certainly did Sunday afternoon. When asked if Horford's play in the post was the gameplan heading into the series, Stevens explained that Milwaukee's small-ball led to open avenues for Horford down low.

Even though Milwaukee's long and athletic wings made deflections throughout the game, Horford's teammates found tight pockets for Horford in the paint -- where he converted most of his field goals while drawing trips to the free-throw line.

Stevens expects the Bucks to adjust their defense accordingly, thus, the Celtics plan to do the same against Giannis Antetokounmpo and Khris Middleton. The duo combined for 67 points Sunday.

And when Stevens was asked what he plans to do to keep 31-year-old Horford fresh and ready to go for Tuesday's showdown, Celtics head coach said this is a part of his job that he's not very good at because when it comes to Horford he's never worried.


"You know, I'm not very at my job but I think one of the reasons is because I don't worry too much about Al," Stevens replied with a smile. "I've always said Al's the perfect role model for young players. He takes care of himself to the nth degree, prepares well, he takes pride in his job, he's a great husband, he's a great father -- he's got his stuff together."

When one reporter asked who Stevens which player he keeps an extra eye on besides Horford, Stevens replied: