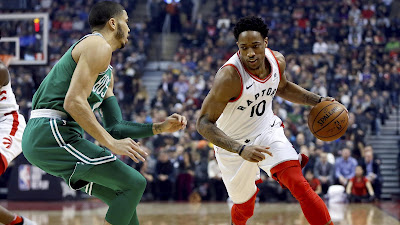 While the shorthanded Celtics fought hard to close the gap, the Raptors kept Boston at bay throughout the night -- reminding the C's why they own the best record in the Eastern Conference.

The Raptors got out to a 20-point advantage in the second half, a deficit the Celtics failed to crawl out of as Toronto held Boston to a season-low point total in their 96-78 win. Terry Rozier returned to the lineup after missing Tuesday night's matchup against the Bucks but it didn't help his team much when he finished with two measly points on 1-of-9 from the field.

The floor became increasingly cramped, the only reliable source of points for the Celtics came from inside the paint -- where Greg Monroe provided a 17-point spark off the bench and it kept Boston within striking distance throughout the night. Marcus Morris, who led the Celtics with a game-high 21 points, helped prevent a fourth-quarter blowout while the majority of his teammates couldn't buy a basket.

Furthermore, the Celtics committed 16 turnovers. Al Horford's 16 points came in doses throughout the night but it wasn't enough to overcome Toronto's play in the second half.

DeMar DeRozan's 16 points led the charge while Serge Ibaka and reserve guard Fred VanVleet each added 15. Seemed like no matter how hard the Celtics fought, Ibaka got open looks in the paint where Kyle Lowry found him early and often. Lowry finished with 13 points and five assists.

With the defeat, the Celtics are relatively locked in for second place throughout the playoffs as the season winds down. Next up for Boston will be a pair of home games over the weekend that start with the Bulls in town Friday night and end with a matchup against the Hawks Sunday afternoon.

The Celtics surrendered 54 points in the paint while shooting 33.3 percent from the floor. Their 78 total points is a season-low for Boston -- a team that was not only down a handful of guys but also playing on the second night of a road back-to-back set.