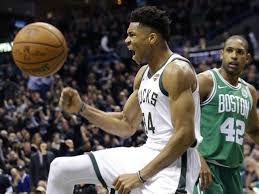 MILWAUKEE -- Facing the possibility of heading into Sunday's Game 4 matchup down 0-3, the Bucks played as if their playoff lives were on the line.

Bucks guard Khris Middleton told reporters before Friday night's game that the start of the game would be just as important as the end and his teammates took those words to heart. Milwaukee annihilated the Celtics in a blowout -- 116-92 -- improving the series, 2-1.

Milwaukee came out firing on all cylinders. They created defensive stops, forced Celtics turnovers and found their offensive rhythm early as they took a quick 16-6 lead.

Defensively, the Bucks limited the Celtics to a dozen first-quarter points then limited the C's to 35 at the end of the first half. Khris Middleton's 23 points led the Bucks, Giannis Antetokounmpo finished with 19 points and Eric Bledsoe added 17 as he hopped out of his shooting funk.

Jabari Parker got the green light, mostly due to the injury of John Henson, who was ruled out of Game 3 due to a sore back. Nonetheless, Parker's 17 points off the bench neutralized the Celtics' brief scoring runs while guys like Antetokounmpo and Middleton rested.

Through three quarters, the production from Antetokounmpo, Middleton, Parker and Bledsoe had a combined 63 points, only four fewer points than the entire Celtics team (67). After Game 2's loss, the Bucks knew it would take a group effort to knock off Boston at home and Giannis and Middleton certainly got the help they needed.

Milwaukee's bench combined for 50 points, led by 17 points from Jabari Parker and 14 points, and five blocks from Thon Maker, who finished with a team-high plus-23 game rating.

The Celtics will look to grab another two-game lead on the best-of-7 series Sunday afternoon in Milwaukee for Game 4.

Boston's biggest lead of the night was one point. The Bucks controlled the pace from the jump and eventually pulled ahead by over 20 points at halftime. When the Celtics pulled to within 14, Milwaukee regrouped and extended their lead back to 20 before the final frame.