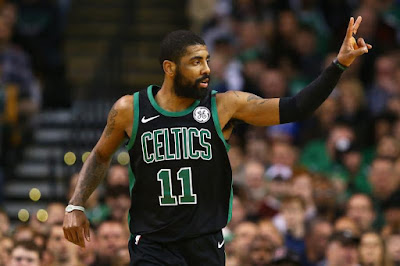 The Celtics have announced that Kyrie Irving underwent a 'minimally invasive' procedure to remove a tension wire in his left knee on Saturday and is expected to return in 3-6 weeks.

According to the team, the wire removal from Irving's left patella tendon should relieve any pain, irritation or soreness that has caused the Celtics All-Star to miss 12 games this season.


"While removal of the wire should relieve irritation it was causing in Irving’s patellar tendon, the fractured patella has fully healed and Irving’s knee has been found to be completely structurally sound.” pic.twitter.com/1R8Zi7GkBc
— Chris Forsberg (@ESPNForsberg) March 24, 2018


Despite the Celtics, who are coming off a huge road win against the Trail Blazers, being 10-4 (including a win over the Hornets, where Irving broke his nose in the first two minutes and a loss against the Pacers two weeks ago, where Irving did not play in the second half) without Kyrie Irving in the lineup,  it's fair to say the C's have been stricken with the injury bug at the worse possible time as the regular season comes to a close.

If all goes well, Irving could be back in time for the start of the postseason, or worst case scenario he could miss the entire Celtics opening-round series and return during the second round of the playoffs.

Boston has been plagued with injuries since the first five minutes of the 2017-18 campaign when Gordon Hayward broke his left ankle and not to mention the more recent surgeries to Marcus Smart's right thumb and Daniel Theis' torn left meniscus.

But there is light at the end of the tunnel for Brad Stevens, as Jaylen Brown will make his return on Sunday after missing the Celtics last six games due to be being in the NBA's concussion protocol and barring any serious meltdowns or injuries during the next 10 games the C's shouldn't maintain the second seed in the East.

The further development of Terry Rozier, Jayson Tatum (the only Celtic to play every game so far this season) and the recent play of Marcus Morris and Greg Monroe, should give the Celtics the needed depth to keep the train chugging along, even if they happen to come up short towards their ultimate goal.