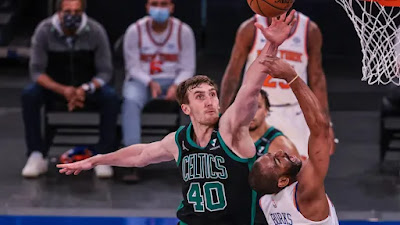 The Celtics' frontcourt has taken another hit, as Luke Kornet could be out 1-2 weeks following an ankle sprain he sustained some time during training camp, according to Shams Charania of The Athletic.
Kornet becomes the latest of the Celtics bigs to be out with injury before the start of the preseason. Danilo Gallinari tore his left ACL last month and Robert Williams is sidelined for the next 8-12 weeks following a recent arthroscopic procedure done on his left knee.
Kornet, who signed a two-year, partially-guaranteed contract over the summer to return to Boston, was set to play a bigger role to begin the 2022-23 campaign -- as he had been seen practicing with the starting lineup earlier in the week. It appears now that will have to be put on hold while he recovers from his latest ankle injury.
On Wednesday, Celtics interim head coach Joe Mazzulla expressed how he's confident that his team can still play big despite being a bit thin in the frontcourt and that Kornet had lot to do with that.

"That was our identity last year, was trying to play big. And like I said before, we're trying to figure out our identity on the defensive end, and keeping it as consistent as we can is important, so I definitely think it’s something," said Mazzulla during Wednesday's post-practice presser.

On Friday, the Celtics reportedly signed veteran Blake Griffin to a one-year, fully guaranteed contract. The 6-foor-10 forward is coming off a season where he played 56 games (24 starts), averaging 6.4 points and 4.1 rebounds in 17.1 minutes per-contest for the Brooklyn Nets.
While Mazzulla on Saturday said Kornet is day-to-day with a left ankle sprain and with the addition of Griffin, the Celtics find themselves heading into the preseason down three rotational big men before their first exhibition game Sunday afternoon against the Charlotte Hornets.
Other than Al Horford and Grant Williams, the Celtics depth options up front include Sam Hauser and Mfiondu Kabengele (two-way contract), plus training camp invites Noah Vonleh, Jake Layman and Luka Šamanić also fighting for roster spots.
Joel Pavón
Follow @Joe1_CSP