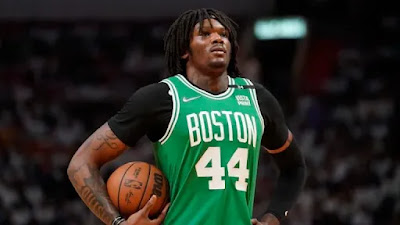 The Celtics announced Friday that Robert Williams had successful left knee surgery and is expected to return to basketball activities in 8-12 weeks.
The arthroscopic procedure removed loose bodies and addressed swelling from the center's knee and will keep him sidelined longer than the original 4-6 weeks that was initially reported this past Tuesday.

#NEBHInjuryReport Robert Williams underwent a successful arthroscopic procedure to remove loose bodies and address swelling in his left knee. Williams is expected to return to basketball activities in 8-12 weeks.

Williams' procedure was performed by Celtics team physician Dr. Tony Schena at New England Baptist Hospital and it was the second surgery performed on the same left knee in the last six months. He had a a left torn meniscus back in March, which ultimately kept him out for about three weeks before returning for Game 3 of the team's first-round series win over the Brooklyn Nets. Williams would go on to play through pain during the Celtics' run to the NBA Finals, sitting out a total of seven games.
Meanwhile, an 8-12 week timeline means Williams could miss at least the first month of the upcoming 2022-23 campaign, which begins on October 18 when the Celtics host the Philadelphia 76ers at TD Garden.
Williams, the Celtics' 2018 first-round draft pick, played a career-high 61 regular season games last season. He averaged 10.0 points, 9.6 rebounds and 2.2 blocks per-game as one of the league's top defensive players.
With training camp set to begin this week, the Celtics find themselves a bit thin in the frontcourt with Al Horford and Grant Williams as the only healthy bigs on guaranteed contracts returning from last season, leaving Luke Kornet (partially guaranteed) and Mfiondu Kabengele (Two-Way deal) to battle for a backup spot.
Joel Pavón
Follow @Joe1_CSP