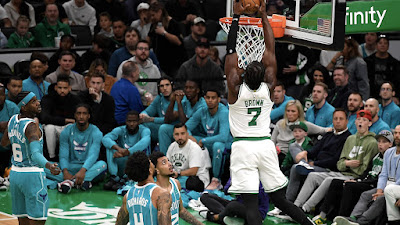 The Celtics opened up the preseason with a 134-93 blowout win over the Charlotte Hornets Sunday afternoon at TD Garden.
Jaylen Brown had a game-high 24 points on 8-of-11 shooting, plus 3-of-5 from 3-point territory to go along with five rebounds in just 24 minutes of action.

"It's preseason, you are trying to get your body going," Brown said in his postgame presser. "Started off with an early game, that was a setup. You come out and you play basketball, the same thing I've been doing my whole career."

Jayson Tatum started off slow offensively, going 2-of-8 from behind the arc and 4-of-11 from the floor overall, but finished with 16 points and six rebounds. Sam Hauser hit 4-of-5 from long-distance to score 14 points, while Malcolm Brogdon added 11 points, five rebounds and nine assists in his Celtics debut.
Boston finished with 41 assists on 48-of-84 (57.1%) made field goals, including 22-of-47 (46.8%) on triples -- as every C's player that in checked scored a basket.

"These guys, this is a team full of unselfish guys that clearly have an objective to just win," Brogdon told reporters after the win. "We want to win it all this year, so we're trying to build for that.
"We're not really concerned about statistics and all that. We know JT and JB are going to lead us every night on the offensive end. It's up to the rest of us to play our roles and to support them but to also play to the best of our abilities every night."

Other than Robert Williams (knee) and Danilo Gallinari (ACL) being sidelined, the Celtics were also without Luke Kornet, who sustained a sprain left ankle during the first week of training camp.
Charlotte didn't get much going on the offensive end, as Kelly Oubre Jr. was the team's leading scorer with 17 points on 6-of-11 from the field. LaMelo Ball added 14 points (5-of-19 shooting), seven rebounds and Terry Rozier chipped in 11 points for the Hornets.
The Celtics had a 29-24 lead to end the first quarter before using a 13-2 run to start the second period that turned into a 16-point advantage and they never looked back. Boston's bench scored 72 of the team's 134 points, while the C's outscored Charlotte 105-69 through the last three quarters.
Joe Mazzulla, who got his first preseason game out of the way since taking over as the Celtics interim head coach for the suspended Ime Udoka, was asked about the victory.

"Felt like I was coaching a great team that wanted to win," Mazzulla said. "That was fun to coach."

The Hornets were held to to 34.7% shooting and 5-of-33 (15.2%) from 3, while being outrebounded 56-43.
Despite leading by as many as 46 points in the second half, the Celtics did turn the ball over 25 times, something to improve on in the final three remaining exhibition games.

"Don't let this game fool you, we have a lot of work to do," said Brown, who scored 13 points in the first quarter. "We have to take care of the ball better, we got to get more connected on offense and defense, rebound a lot better. Those are the type of things we want to build now in the preseason.
"We're not patting ourselves on the back here for winning a preseason game. It's a lot of work to be done so better get to it."

The Celtics will host the Toronto Raptors Wednesday night at home, with a 7:30 pm ET tip-off.
Joel Pavón
Follow @Joe1_CSP