Al Horford (lower back) set to return against Bulls tonight 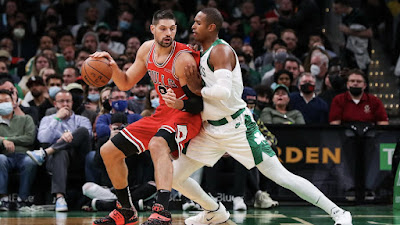 The Celtics were able to hold on to beat the Orlando Magic 126-120 without starting center Al Horford in the lineup.
The veteran big man sat out with what the team called lower back stiffness, despite many assuming Horford was simply resting on the second night of the Celtics' first back-to-back of the season.
One the team's most recent injury report, ahead of Monday's matchup against the Chicago Bulls to wrap up a three-game road trip, Horford was not listed -- meaning that he should be active to play.
The Celtics are going to need every bit of Horford when they face the Bulls tonight, as their All-Star big man Nikola Vucevic is averaging 18.3 points on 43.6% from the field and 33.3% from deep to go along with 9.7 rebounds so far in three games played this season.
On Saturday against the Magic, the Celtics started Noah Vonleh in Horford's place, while Grant Williams, Blake Griffin and Luke Kornet held down the fort in the frontcourt. Vonleh, Griffin and Kornet combined for three points on 1-of-3 shooting and four rebounds, forcing interim head coach Joe Mazzulla to stick with Williams and Jayson Tatum as his primary centers for the majority of the game.
While Tatum hit the 40-point mark for the first time this season, Williams put up 13 points on a perfect 3-of-3 from beyond the arc and six rebounds, as he also called out his teammates' defensive struggles after allowing 120 points to a Magic's roster that was averaging 103.5 points in their previous two games.

"We just had to be more physical. We didn't do our job tonight from the start," Williams said in postgame presser. "We allowed them to get comfortable. When teams are comfortable, they make shots, but especially when I'm at the center position. Even then, I have to do a better job of making sure that not only to keep the ball in front, but also just make sure we rebounds, make sure that we’re physical both on the ball defending it and off."

Despite Williams getting off to a good start this season, having Horford back as the Celtics starting center goes beyond what he provides on the box score. Though he would prefer not to sit out any games, Horford isn't completely against the idea, especially with team looking to play well into June for a second straight year.

"I'm not saying I'm completely opposed to sitting out, but I'll be fine, and I'll be good to go," Horford said Friday afternoon. "I'm being consistent. I'm getting after it. I feel good. I'm being able to get out there and play and doing the things I need to do. It's all about preparation. It's a mindset."

Horford, 36, is playing in his 16th NBA season, as the Celtics are set to face the Bulls tonight at 8:00 PM ET.
Joel Pavón
Follow @Joe1_CSP