Bulls 120, Celtics 102: Jayson Tatum's 28 points not enough in first loss of the season 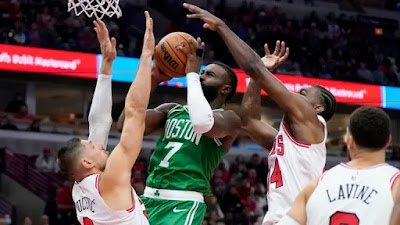 The Celtics blew a 19-point lead Monday night at the United Center to fall to the Chicago Bulls 120-102 in their first loss of the season.
Jayson Tatum finished with a game-high 26 points on 8-of-18 from the field, including 4-of-8 from 3-point territory to go along with eight rebounds and five assists, while Jaylen Brown on his 26th birthday added 21 points on 23 shot attempts.
Malcolm Brogdon added 12 points off the bench and Marcus Smart chipped in 11 points, six assists for the Celtics -- who concluded their first week of the 2022-23 campaign at 3-1.
DeMar DeRozan led the Bulls with 25 points and Ayo Dosunmu was 9-of-10 from the floor, plus a perfect 4-of-4 from deep to record 22 points. Zach LaVine netted 19 points and Nikola Vucevic notched a double-double of 18 points, 23 rebounds for Chicago (2-2).
After leading by 19 in the first quarter, the Celtics were outscored 35-15 in the second period and trailed 64-54 at the break. Smart hit a buzzer-beating 3 to end the half and Boston used a 17-4 run to star the third and cut the deficit to 69-66 -- the closest they would get the rest of the evening.
The Bulls responded with a 15-2 run, including two made free throws by DeRozan on two technical fouls called on interim head coach Joe Mazulla, as he was ejected with less than five minutes to play in the quarter.
Following a Vucevic foul on Brown while attempting to block the Celtics wing, Mazulla went onto the court and made "unsportsmanlike comments" that led to the first technical and what drew a second technical was because he "continued to point and complain," according to crew chief Marc Davis in the league's official Pool Report.
Mazzulla explained in his post-game presser that he was trying to get the referee's attention and that he needs to do a better job of keeping his composure, but he also added he did not use any obscenities.
Grant Williams also got tossed out of the game early in the final frame when he got called for an offensive blocking foul. While jumping in protest, Williams made contact with referee Cheryl Flores and was immediately ejected with 8:58 left to play and the game pretty much out of the C's reach.
Boston shot an abysmal 37% from the floor to go along with being outscored in the paint 46-34 and and out-rebounded 60-45 in the loss.
The Celtics are off until Friday when the host the Cleveland Cavaliers at TD Garden, tip-off is at 7:30 PM ET.
Game Notes:
The Bulls hit 48.3% of their attempts and were 47.6% (10-of-21) from 3-point territory, while Boston was 37.5% (18-of-48) from behind the arc. The Celtics committed 11 turnovers to Chicago's 14 and handed out 28 assists on 37 made baskets, while the Bulls dished out 29 dimes on 42 made shots
Joel Pavón
Follow @Joe1_CSP