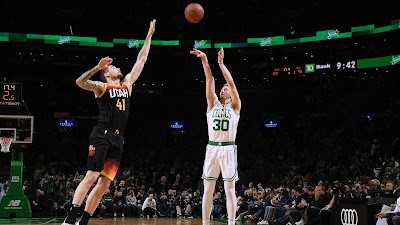 The Celtics have re-signed forward Sam Hauser to a new three-year contract, according to Boston Globe's Adam Himmelsbach.
The deal is reportedly worth approximately $6 million, with the first two seasons being fully guaranteed. Hauser hit 19-of-44 attempts from 3-point territory this past season, despite being limited to just 158 minutes over 26 games for the Celtics.
The 6-foot-8 shooting specialist out of Virginia went undrafted in the summer of 2021 before signing a Two-Way contract with Boston and the Maine Celtics.
Hauser and the Celtics agreed to a two-year, standard contract following this February's trade deadline and Boston creating several roster spots.
Prior to the start free agency last week, the Celtics declined their team option on the second year of Hauser's contract, thus making him an unrestricted free agent with the intention of re-signing the forward to a longer deal. Boston was able to use Hauser's Non-Bird rights to give him a new three-year contract.
In 13 games with the Maine Celtics of the G League -- including 12 starts -- Hauser averaged 20.2 points, 6.2 rebounds, 2.9 assists and 1.1 steals in 35 minutes per contest, while shooting 46% from the field and 40.7% from deep on 10.8 attempts.
Hauser becomes the 12th standard roster spot for the Celtics after the reported Malcolm Brogdon trade with the Indiana Pacers, the pending signing of Danilo Gallinari, who is waiting to clear waivers to become a free agent and the re-signing of veteran big man Luke Kornet.
Joel Pavón
Follow @Joe1_CSP